By Dan Larsen | 27 June 2020
Dan takes a look at the stats that lay bare the missed opportunities this season.

It’s official. After spending two years atop the summit of the Premier League, Manchester City officially ceded their crown to Liverpool on Thursday night after suffering a 2-1 defeat at the hands of Chelsea at Stamford Bridge. Thursday night only confirmed what we’ve known would happen for several months now.

For all intents and purposes, the title race was virtually decided back in November when City suffered a devastating defeat at Anfield. The loss they suffered that night put them nine points back in the title race after just 12 games, a nearly insurmountable deficit given how great form Liverpool were in from the off. Any lingering hope of closing that gap was completely extinguished in the following weeks. By Mid-December, Liverpool had the title won. It was only a matter of when it would become official.

With the league title having gone elsewhere, it’s worth reflecting on what COULD have been in this league season for City. Much like the 2016-17 season, City have significantly underperformed relative to what their advanced stats suggested they were capable of. Through 31 league games, City have managed to get just 63 points, over five points worse than what their expected points total (68.97) is this season. They’ve posted an expected goals total of 79.22, by far the best in the league, but scored two goals less than that (77). Their expected goals against (32.60), though quite high, is still fourth best in the league.

Two things have taken City’s season off track, and they’re the same exact issues that were present when I wrote about the team’s struggles back in November. The attack has failed to create and bury their chances with as much as efficiency as they have in prior seasons. And, the defence has conceded far more high-quality goal scoring opportunities too than they have in their prior two title-winning seasons. Last night perfectly displayed both of these deficiencies.

At first glance, it appeared as if City controlled the game for long stretches. They finished the game with a nearly two-to-one advantage in possession. However, City were absolutely annihilated in every other metric last night. Chelsea registered 15 shots, TEN of which ended up on target. City mustered just two shots on target out of their 11 chances. On top of that, Chelsea were far superior in the advanced stats too, posting an eye-popping xG total of 4.21 to City’s 0.69.

As has been the case in some of their previous losses this season, City failed to create the kinds of clear-cut chances we’ve come to expect them to while making awful mistakes at the other end of the pitch. An inexcusable miscommunication between Benjamin Mendy and Ilkay Gundogan led to the first Chelsea goal. Fernandinho committed a blatantly obvious handball in the box later in the game, which led to his sending off and Chelsea’s second goal via a penalty. City were also quite fortunate that Kyle Walker was able to make one of the best goal-line blocks of the season on what should have been a second goal for Christian Pulisic. That chance stemmed from a mistake from Ederson. To put the icing on the cake for that performance, the one good chance City had to take the lead, which came from an incredible counter-attack, ended up with Raheem Sterling’s shot hitting the post.

Though some bad luck has undoubtedly befallen City at times this season (see both games against Tottenham this season), much of their problems in the league have been self-inflicted. On the surface, City still rank ahead of Liverpool in expected points (68.96 to 64.04), expected goals for (79.22 to 64.55), and expected goal difference (46.62 to 34.87) according to understat.com. Even in infogol’s calculations, which vary a bit from understat.com. City are still ranked as the expected first place team based on their advanced stats. The truth, however, is that City haven’t been as elite as we’ve come to expect.

This February article on City’s season from Infogol sums up the story quite well: City had it in them to be much closer to Liverpool in the title race than what the table reflects, but Liverpool still deserved to be champions. Liverpool have conceded far fewer high-quality goal scoring chances than City have, and they have consistently picked up their performance level in tight games which has led to them getting better results. Every team needs SOME luck to go in their favor to get the amount of points Liverpool have gotten so far. City certainly had it in the centurion season two years ago. However, luck doesn’t come close to explaining all or even most of it. They finished their chances and got results when they needed them. Time and time again, City have failed to do that this season.

At the end of the day, City are still right there in terms of quality and talent with Liverpool. They should look back at this season and remember that they should have been much closer to Liverpool than what the table reflects. With a few solid additions this summer, primarily at centre-back, City could be right back at the top of the league summit come this time next year. For now, though, the focus shifts to the FA Cup and UEFA Champions League, both of which are still well within reach for them. We’ll see if City can make this yet another treble winning season come August. 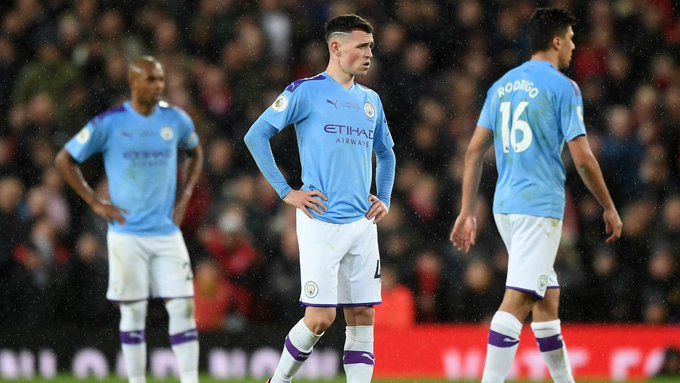