By Dan Larsen | 21 July 2020
Dan argues that Joal Cancelo has been no flop in his debut season at City.

Who has been Manchester City’s best defensive player this season? In past seasons, the answer may have been debated, but that was due to there being several good options to choose from. This season, it could be argued that none of City’s defensive players have stood out in a positive way. With defensive miscues aplenty across the entire backline that have cost the team countless games, especially big games like this past weekend’s FA Cup semi-final against Arsenal, it can be difficult to find a silver lining in these positions given how the season has played out.

A deeper dive into the numbers, however, reveals that one City defender has stood out above the rest: Joao Cancelo. Though he has played second fiddle to Kyle Walker for most of the season, Cancelo has quietly been great when he’s been given the chance. This has come in spite of the fact that manager Pep Guardiola has often miscast him when playing him, asking him to work almost exclusively as an inverted full-back rather than as a high-and-wide wing-back where his elite crossing skills would help stretch opposing defences.

Though Cancelo has featured in just 15 games in the EPL, 11 coming as a starter, he’s made the most of those appearances. He’s averaged 2.4 tackles and 1.3 interceptions per game. The former leads the team, and the latter is tied for second best with Eric Garcia (Laporte leads the team average with 1.5 interceptions per game). He ranks second out of the defenders in the side tackles per game (two), and has a solid 1.3 interception average in his six UCL appearances as well, four of which came as a starter.

The discrepancies in his attacking numbers can be largely explained by the way that Guardiola has utilised him this season. As mentioned earlier, Guardiola has preferred to have him play as an inverted full-back rather than as the width provider. Perhaps because he often shares a side of the pitch with Riyad Mahrez, who can be inconsistent at tracking back, Guardiola has seen it necessary to have someone with his pace and defensive skills working as cover on that side. Cancelo has handled this responsibility well, even if it detracts from the best offensive skills that he can provide. It’s also worth noting he has been efficient with his short passing, posting a career best 89.6% completion percentage on 56.5 attempts per game.

As City look ahead to the UCL in two weeks, serious consideration should be given to playing Cancelo over Walker at right-back. Even though he’s appeared less often than many would have anticipated after his expensive summer move, Cancelo has proven to be the most competent of City’s defensive options when called upon. His defensive stats and form rating clearly demonstrate this.

Guardiola should also consider utilising his attacking skills in these games to provide additional width, especially when City need it. Without Leroy Sane’s pace, the club have lacked that consistent option to run in behind well-positioned defences, especially against teams that play with a back five. Cancelo can help remedy this, if asked to do so, given the pace and dribbling ability that he possesses. As we saw on Saturday, City really missed having that extra width down the right side, something Kyle Walker is unable to remedy due to his poor crossing ability.

City have a potential world-class right-back on their hands with Cancelo. It’s time for them to recognise this and pick their teams accordingly. Their success in the UEFA Champions League may literally depend on it. 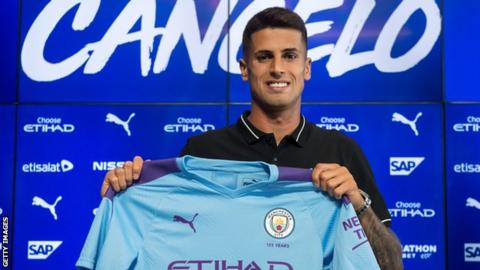