The media cycle surrounding the Champions League ban handed down by UEFA to Manchester City has gone through multiple cycles. First was the giddy phase, as for some journalists this news was far more sexually gratifying than any previous Valentine’s Day had ever been. The immediate glut of stories, excitedly predicting hypothetical scenarios on the basis of no legal knowledge or insight and with no similar past cases to compare it to, was tiresome, yet inevitable.

Next came the “Manchester City aren’t cooperating” phase, where the club received criticism for refusing to speak to journalists. The likes of Rob Harris and Tariq Panja, the most neutral of journalists who would definitely give City a fair shake, were growing frustrated that City weren’t sitting down with them and giving them an interview about the situation. This only intensified when the club released an interview with Ferran Soriano, in which he addressed the UEFA ruling and said everything that he was legally able to say. Needless to say, this did not go down well with the likes of Rob Harris, who, to all our shock and surprise, criticised the club for doing so. 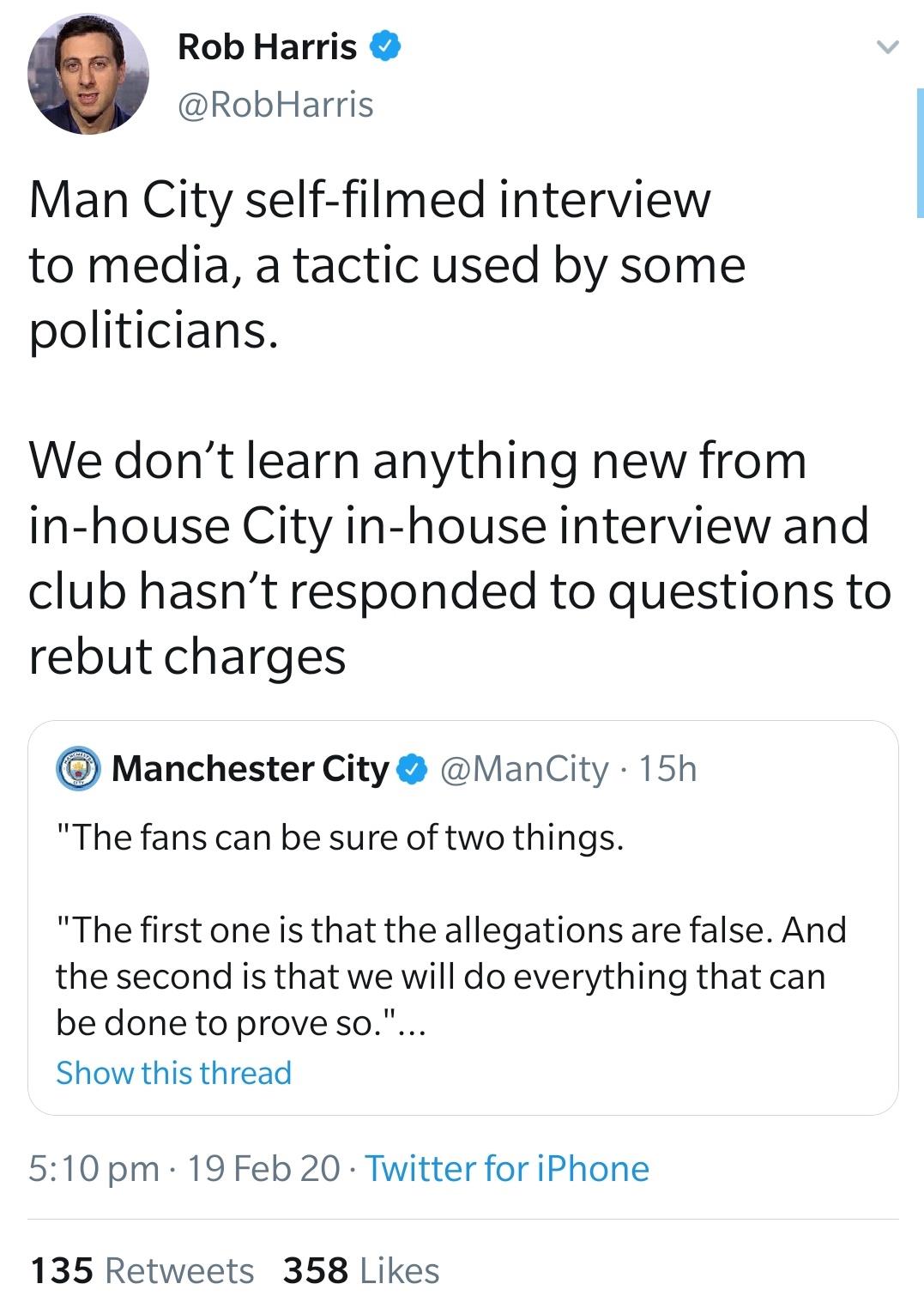 If there’s one thing which is going to endear you to the club and make them regret not giving you a one-to-one interview, it’s criticising the club’s approach with their in-house media. Needless to say, he deleted this tweet not long after posting it, however nothing is ever really deleted from the internet.

There is a third phase which has rumbled in the background throughout this but has come to the fore more recently – the fans. City fans have a reputation amongst those in the media, and you don’t have to read too deep into it to see this. One look at Miguel Delaney’s Twitter activity, if you can be bothered to trawl through 5,000 daily tweets as he argues with those who disagree with him, shows that he’s pretty much eternally locked in a battle with City fans. He and his WhatsApp group of fellow journalists (allegedly) have all tarred City fans with the same brush.

The fans are often scrutinised for daring to defend their club and its ownership from the tirade of abusive articles it receives. No City fans are readily claiming that Mansour is cleaner than clean and that there aren’t some very legitimate issues going on in the gulf, some perpetrated by the Abu Dhabi government, the argument has always been that this has absolutely nothing to do with the running of Manchester City. Kevin De Bruyne isn’t on the front lines in Yemen, shooting children and stoning gay people, much as Nicholas McGeehan would like you to believe this is the case. The two issues are very separate. So in the aftermath of the FFP ruling, many in the media were preempting a huge response from City fans, none more so than talkSPORT presenter, Georgie Bingham. Upon the announcement of Manchester City’s impending two-year Champions League ban, Georgie took to Twitter to announce that she was now dreading her show which would be airing the following day.

Ended with a smiley face so that the classic “I clearly meant this as a joke” excuse was safely in the bank if there was too much backlash, it was clear to pretty much every City fan that it wasn’t meant in jest at all. Having called City fans “the saltiest fans on social media” in the same tweet where she complains that she’s going to get trolled for the mere act of talking about the club, she’s pretty perfectly set up the narrative which will inevitably follow. Twitter is full of idiots. Idiots from all fan bases, City included. Any journalist or person in the public eye who slags off a football club is probably going to be met with lots of criticism from fans of those clubs. Some constructive arguments, some outright abuse. So, when Georgie inevitably received a healthy dose of the latter, having thrown a couple of buckets of chum into the shark-infested waters that is football twitter, the self-fulfilling prophecy was complete. 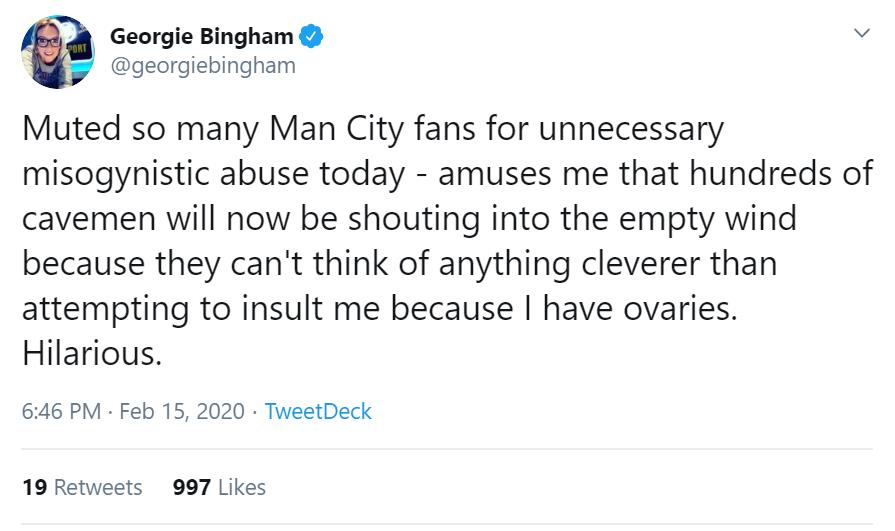 Needless to say, the sexist abuse that Bingham inevitably received is ridiculous. Criticising somebody’s opinion is all well and good but anything else is just irrelevant and stupid. This tweet alone would have been a valid response, though it’s the following tweets where her true feelings are made clear. 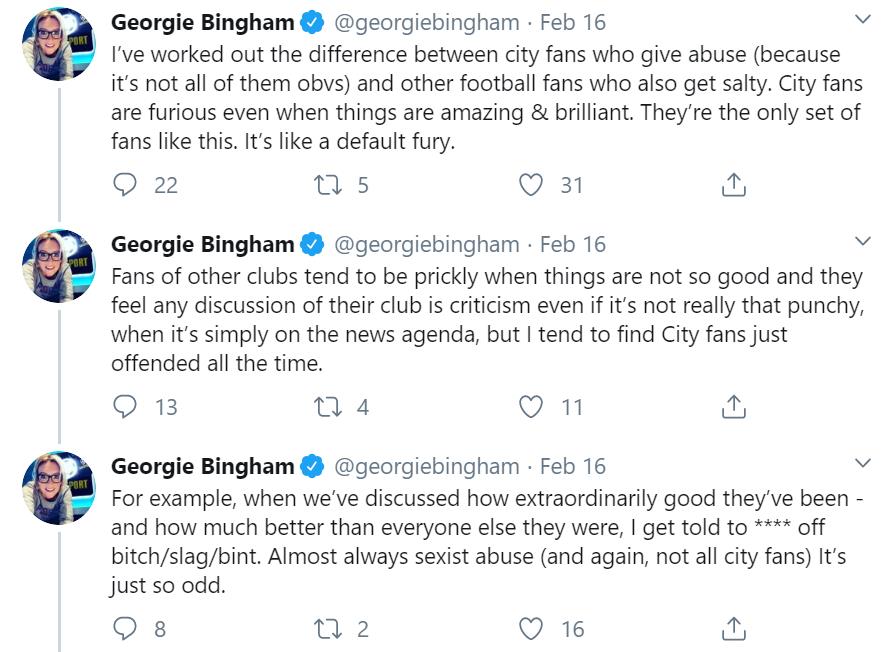 The fundamental reason why City fans are always annoyed by the media narrative, even when “things are amazing and brilliant” is that there is always a caveat to our success. The media storm which followed our domestic treble winning FA Cup victory shows exactly this – the focus was not on the success of the club but how they achieved the success which, in the eyes of the media, is a combination of money and cheating. I don’t know exactly what Georgie says when she praises the club on her show, however if you discuss how extraordinarily good a club has been and you’re still receiving relentless backlash from the fans of said club (sexist abuse aside), there was probably something fundamentally off about the praise, which is something we’ve been seeing from the media pretty much ever since we became successful.

Putting this aside, the thread of tweets shows just how much respect Bingham has for City and their fans. The mask has slipped from the face of the “neutral” sports presenter who has basically just admitted, as if her initial tweet about City fans being the “saltiest fans on the internet” wasn’t enough, that she finds an entire club’s fan base irritating to have to deal with and that she basically doesn’t really like us. Nothing is less likely to make a fan base stop abusing you than directly telling them that you don’t like them. And so not just Manchester City, but now their fans, are the bad guys. The fans are back to being the Abu-Dhabi-defending shills who are willing to ignore any and all evidence to defend their club in the face of criticism, all because City fans weren’t prepared to put up with being called salty for not appreciating being the easy target of the media once again.

Another interesting tactic which has now started to be deployed is looking at City’s fan forums in order to generalise fan opinion. One specific example of this is an article by Jonathan Liew of The Guardian, who refers to Manchester City message boards, in which, shockingly, he managed to find some people saying stuff which isn’t very reasonable in the immediate aftermath of a big event. 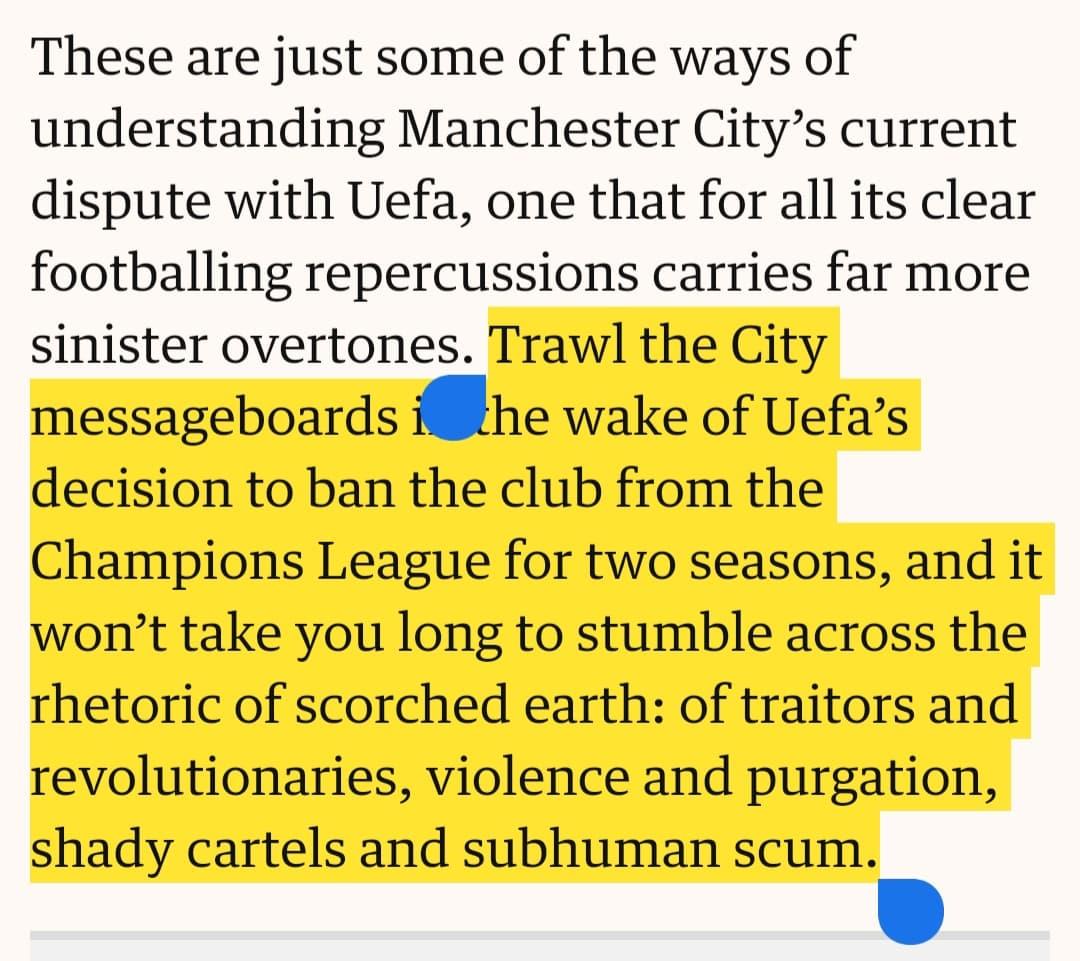 Any single person reading this article could spend 5 minutes on a fan forum in the aftermath of a negative result or negative news and find hyperbolic, often downright idiotic, comments and responses to the situation. Yet Liew here seems to be implying that this is the standard response amongst City fans and that we’re all clambering to deny, deny, deny any kind of wrongdoing, which is precisely the opposite of my experiences with pretty much every City fan who has any understanding of the situation whatsoever. Of course, there is a general feeling amongst City fans that UEFA have got it in for us but journalists are wrongly just assuming that this is based solely on the fact we’ve been punished twice for failing FFP, when anybody with any understanding of the fan base would be able to tell you that there’s a decade’s worth of things, some big, some small, that UEFA has done which has directly impacted the fan base as well as the club itself.

This nit-picking of fan forums is something which is rarely afforded to any other fan base. Arsenal Fan TV is the natural comparison, in which only the loudest and most meme-bait of fans get any attention and make the general fan base look bad as a result, however I can’t remember any result or breaking news which has affected any other top six club in which the phrase “Trawl the <insert club> message boards and you will find…” is used. It’s just the latest in a long line of attempts to discredit the fan base and any legitimate argument which they are putting forward against the prevailing narrative that City are evil and deserve to be punished. And so, a week after the news initially broke, Rob “Pep, congrats on your FA Cup win, have you been taking under-the-table payments from Abu Dhabi like Mancini did?” Harris reflected on a week in which the levels of abuse he received probably skyrocketed. 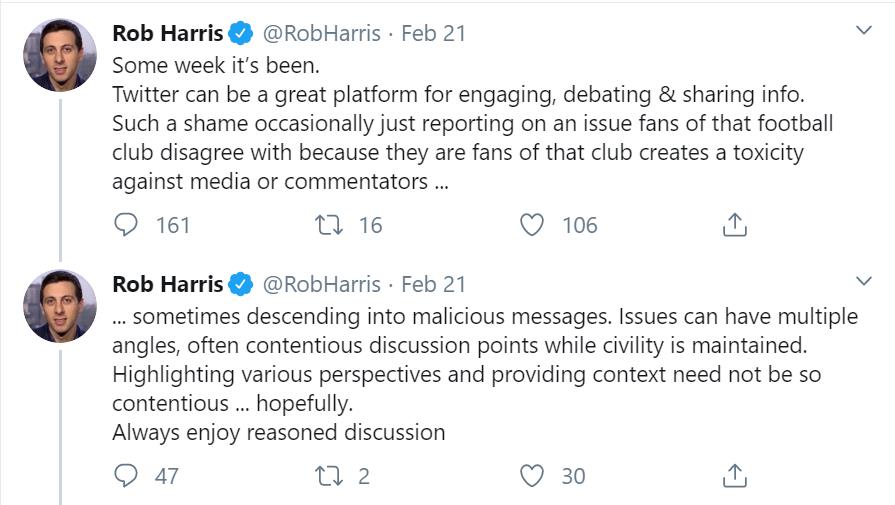 The irony of Rob Harris preaching about maliciousness and toxicity is sweet indeed. A man who preaches about human rights abuse whilst taking payments from Qatari media company, Al-Jazeera, is absolutely not the man who should be preaching about “reasoned discussion”. The nub of what Harris is saying is that we, as fans, should give the media a fair shake. We should take what they say not as agenda-driven, systematic criticism of the club, its owners and its fans, we should just take it as “a different angle”. I would be more than willing to accept this is the case were it not for the fact that I’m yet to see many of these news outlets provide any other angle. If The Guardian and The Independent were throwing out 10 articles about the club and there was a 60/40 split, maybe even just a 70/30 split, of ‘City are bad’ vs ‘City are going to appeal and here’s why’ articles then I would be fully understanding of it all.

However, what we’ve received instead is a glut of articles which are happy to condemn Manchester City as absolutely guilty without even waiting to see the contrary evidence which the club will offer to CAS. I’m not saying that Manchester City are totally innocent or have never done anything wrong in regards to FFP and I certainly don’t expect to see such articles in the media because they’d be disingenuous. This doesn’t change the fact that there is ultimately an appeal process about to take place over this, yet nobody in the media seems very keen to acknowledge it unless it’s in the context of “City are throwing a strop like the spoilt rich kid whose parents have taken the car they bought for him away”.

Ultimately, Manchester City are an anomaly of a club in many ways – the chief of which being that we’re now a top six club which has a (relatively) small fan base. We’re an easy target because everybody else in the top six hates us, including the three biggest fan bases in the country (Arsenal, United and Liverpool). Writing negative pieces about us or hitting out against the club on radio shows or podcasts brings little in the way of negative outcomes and so media outlets are more than happy to kick the club when it’s down. The praise and the clicks you’ll get from the rest of the top six far outweighs the wrath of the saltiest fans on the internet. 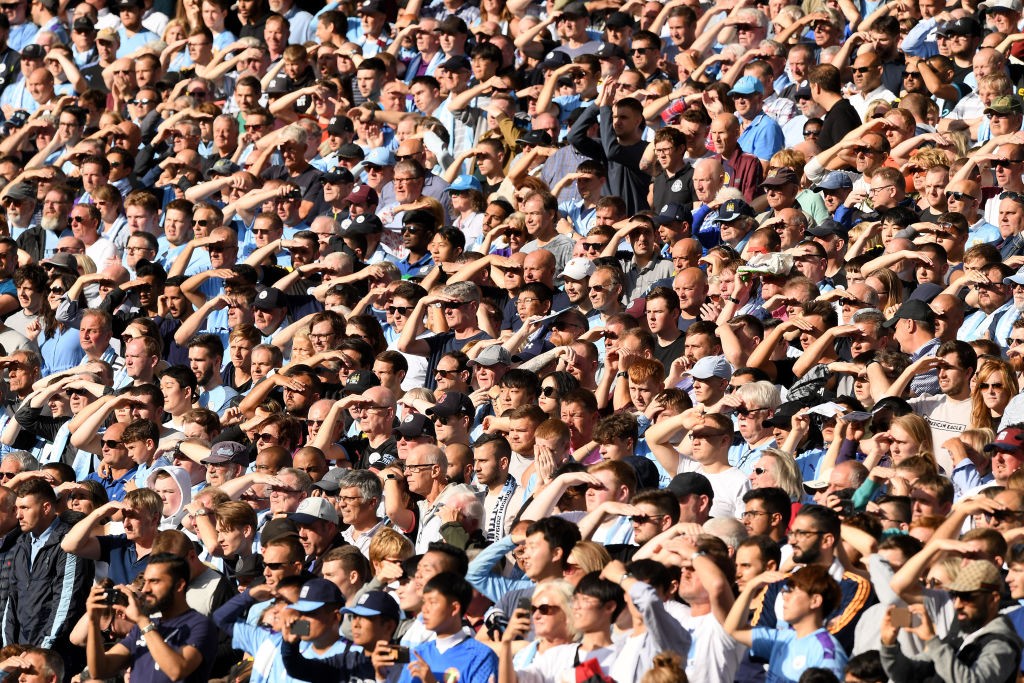