By Howard Hockin | 12 February 2020
Howard looks at all things football this week.

Yet again, football twitter throws itself into full whataboutery mode whilst failing to understand context or the passage of time. I’m a casual whatabouter, so I appreciate the hypocrisy within here. The points below remain however. As the title suggests, I’m talking about the latest “racist” footballer social media incident.

Let’s make it clear for those that cannot see a difference. Deli Alli’s message was sent privately, Bernardo’s wasn’t (in theory at least – Bernardo’s method was rather more public than Dele’s). That’s rather important when considering context.  I criticised Bernardo and Pep even more so at the time, so I do not speak with blinkers on. So I say in all honesty that of the two incidents, whilst private, Alli’s actions were worse, in my (worthless) opinion. Apart from the casual racism that Alli displayed (more deliberate than Bernardo’s), he is joking about an issue that is killing thousands of people, as we speak. Hey, we’ve all joked about sensitive issues and things we shouldn’t have done, I am not trying to take a high moral ground here, but just trying to compare the two situations. They weren’t the worse incidents in the world, though I am ill-equipped to judge, and this is not a competition. But even this isn’t really the crux of the problem I have with people’s reaction to this latest incident.

So enough rambling, my key point is this. The sad thing is that many rushing to condemn Alli aren’t particularly interested in this racism malarkey, just a seething desire to see justice done because – Bernardo Silva. Maybe they’d be better served worrying about the real issues (racism), rather than the lack of FA activity just hours after the story broke, or the minutes dedicated to the story by Sky Sports. Alli’s story may not have run its course yet, which is rather relevant to crying about the two incidents not being dealt with in a similar manner. Alli may still be subject to censure – the FA can move at a glacial pace at the best of times. But it seems many already know the outcome. Amazing how many commentators have mastered time travel and seem to be sure that Alli will get away with this scot-free. Except that it now seems he won’t. Oops. I do understand however the frustration at ow certain (not all) football journalists deal with incidents and how some players get an easier ride than others. It has always been the case, and I am not attacking those seeking to expose the hypocrisy. As a fevered retweeter, I’m not in a position to.

Racism will never disappear, it will be a constant in our lives for as long as we inhabit this planet. But of course we all have a duty to ensure that it is restricted as much as possible and that it is punished too. Education also plays an important part in ensuring a brighter future. A large onus lies with football’s authorities to lead the fight, a fight many of them have been ill-equipped for in the past. But all football fans have as big a duty to fight the good fight too. And football tribalism is not helping that fight.

The final issue is one that’s hard to define. I can’t answer the question over whether people should be punished for private messages – it’s rather a subjective issue. I lean towards no, but whilst if you published all of our private messages we’d have a lot of embarrassment to overcome and some explaining to do, I certainly have never engaged in most of the types of exchanges that the likes of Silva, Ali or others have been involved in. Strangely enough, I do not resort to misogynist, sexist or casual racist views just because I’m communicating privately with someone.  Private correspondence has provided career suicide to many down the years though, from Garry Cook to Malky Mackay to many others. Nothing is truly private nowadays if you have a public profile. Just ask Der Spiegel. At the very least Allis actions were ignorant and naive. But if he understands the error of his ways and matures, then there is little need to dwell on the incident and blow it up out of all proportion because you think Sky Sports once did a hatchet job on one of your team’s players. Especially as a one-match ban may well be incoming and the player seemed to see the error of his ways very soon after his message was sent.

Let’s cut to the chase – Manchester City were correct to postpone the match against West Ham United on Sunday morning. They had little choice when it was clear that a significant portion of those with tickets for the match would not make it to the match, or should not attempt to. As perhaps more importantly, the advice they will have been given (it is not a decision they make off their own back) was that those that do travel may have their safety compromised. The trains were decimated, and travelling was nigh on impossible for many coming from outside the city. The Met Office had advised only travelling if necessary, so the club had little option. An hour of sun does not make the flooding disappear or the trains run on time. Even Mussolini couldn’t sort that out, despite what you may have heard. The decision was not made with weather conditions at the time of kick off in mind. Though just for good measure, a short hail and thunderstorm arrived right on cue.

Clubs have to act early, especially when the away team is not local. Even if they were, there will still be fans travelling from far and wide – not everyone lives 2 streets away from the ground. Better to act early and look foolish once kick-off arrives than wait and wait and wait and call off the game at the last minute. Previous postponements have been late in the day (or as per Ipswich in 2000, during the match), adding to the inconvenience of all involved. Like Sunderland and Borussia Monchengladbach, the weather cleared after postponement announcements, but that does not mean the decision was wrong. This decision was right – at the time of the announcement I had just reached the city centre, and there were rivers of water flowing all around Piccadilly Gardens. Though on the plus side, it looked all the better for it.

What City fans have been saying for over a decade now, and what brings the greatest accusations of paranoia should be quite clear to all. Modern football, from the Premier League to the Champions League and beyond, has been shaped by the likes of Liverpool and Manchester United. It is shaped in their image, for their benefit. That’s why City splashing cash they hadn’t “organically” earned had to be stopped, asap. They never stop trying to bend the rules of competitions to protect themselves, to maintain the status quo. The end game is the almost inevitable European Super League. In the meantime we will be treated to extra games in the Champions League. Another change suggested is better seeding for historically successful sides. Laughable.
This doesn’t make me angry. City’s owner and board will try and do the same wherever possible. This is not a cheap dig at Liverpool and United. That’s how the world works. The big club owners are after money, power, influence. They all want the system to work in their favour. United’s and Liverpool’s ascendancy was well-timed to take advantage of the birth of the Premier League and beyond. But let’s not pretend that the likes of Liverpool and United haven’t shaped much of the current football landscape. They’ve helped enable everything that has followed.

At least Sunday’s downpour and postponed match is a tenuous excuse to post one of my favourite photos of recent years. See below. The 2013 Premier League Asia Final in Hong Kong, subject to the odd typhoon or two that week. City beat Sunderland 1-0, but at the moment captured below, Alvaro Negredo had just been flattened by a “robust” challenge from John O’Shea. This was probably not what Negredo expected from a pre-season jaunt to the Far East. 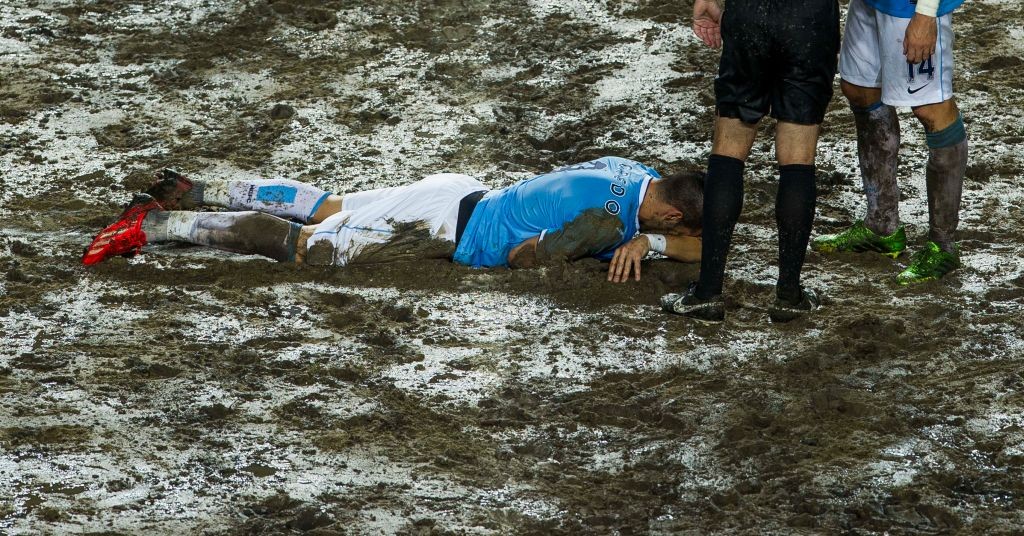