The Premier League Does Not Need Leeds United - But I Do.

By Howard Hockin |02 June 2020
Howard can’t wait for the possible return of Leeds United to the Premier League.

It was September 2000. The 21st century was well underway, and few of us could predict what life had in store.  A very different world in those days, when viruses were mainly electronic and City were average, at best. City would soon be moving to a new ground, which would hopefully bring new opportunities and new hope. One day, maybe our time would come. But that day seemed as far away as ever as I travelled to Elland Road that evening. The season was young, but the months ahead already seemed pretty well mapped out for both teams.  The Leeds star shone bright, whilst City’s would wane once more, relegation on the horizon.

Surprisingly though, City rose to the challenge that night, as Paolo Wanchope returned from international duty to inspire City to a 2-1 victory against the previously unbeaten Leeds United. With my friend Gill, a fellow blue naturally, the victory was quite the surprise to both of us and the other travelling blues. Leeds would win the reverse fixture 4-0 a few months later. And earlier that year, City had been given a footballing lesson in the FA Cup, as Leeds came from behind to win 5-2. Thus the final score on this September evening was a surprise to the home fans too, who probably turned up expecting a routine victory, as we often do nowadays. They did not take defeat well, the mood outside dangerous and close to boiling point. We left Leeds covered up, allegiances kept very quiet, for obvious reasons. In a sanitised world of Premier League football, even then the ugly post-match atmosphere stood out like a sore thumb. It had been many years since I had felt like that, since I had dodged police horses outside Maine Road as missiles flew in all directions. It was wrong, and yet…..and yet….

I wrote most of this article in February. It’s no exaggeration to say it was a different world then. Right now, City could receive a 10 year Champions League ban and relegation to the National League and I’d shrug my shoulders. Possibly. Football has never mattered less, and it will take quite some time for the buzz to return. It will happen, but it will take time. I find the endless discussions about completing the season mind-numbing, but have softened my stance with time. Little wonder then that much of this piece and the paper-thin arguments it puts forward is based on looking back as much as looking forward. Talking about Leeds in the Premier League feels weird, and I feel dirty for doing it. Talking about a future when no one knows what it holds. But talking about football is ok, we are allowed to, and at some point we’ll be back in our normal routine. And I think it’s good for me to talk about it too. Just occasionally the outside world needs to be ignored, for the sanity of us all. And after the announcement of the resumption of Premier League football, we learn that the Championship plans to resume games on 20th June. The return of Leeds to the top flight may just have edged that little bit closer.

But why my fixation with Leeds United? Well, I am obviously swayed by the fact that I lived in Leeds for five years. The first three years at university were undoubtedly the best of my life. Not a care in the world, in the days when I could survive on a diet of fried chicken and beer yet still only weigh 10 stone wet through. Hyde Park digs, Otley Run pub crawls and the odd lecture. It was good to show your face occasionally, after all. Rickys on a Monday night, where a beer cost 10p and a double spirit 50p, if you were feeling flush. The Poly Bop. The late nights and the hangovers. Rising just in time for Neighbours at 1:30pm was a normal state of affairs. Leeds had a Wendy’s too, the connoisseurs choice of burger outlets. I stayed on for two years after university, desperately trying to cling onto that lifestyle, those experiences. It was not to be though, life and everyone else had moved on, and eventually so did I, to accept the daily grind and the endless poverty now that I had responsibilities. Once a burglar had left my flat empty-handed because there was nothing worth stealing, I realised there had to be a better way.

The thing is, during those three years, I rarely showed any great desire to visit Elland Road. I didn’t create a bond with a section of its fan base. I feel in love with the city instead. My group of friends at university came from far and wide, and I don’t recall many from the local area. Nor was football a constant topic of conversation in the days before social media, in an era devoid of much of the current toxicity. I went back there with a fellow alumni the other summer, to check out old haunts and sigh a lot under a fog of nostalgia. Or to put it bluntly, we went back to drink beer in various pubs. A lot had changed, and a lot had stayed the same. But now more than ever I want to return once more, to watch my football team, to experience a City the way many football fans do.

So it is not a love of the football club that makes me pine for their return to the top tier of English football. The media will fawn over a club with limited historical success that in the past 15 years broken almost every rule in the book. As you well know, some clubs are treated differently to others. What’s more, the Premier League does not need Leeds United, Sheffield Wednesday or others. After all, it has been doing just fine without them. No, for me, the more relevant question is to ask whether the Premier League would be better with such teams? That is entirely subjective of course, but for me, it certainly would be worth Leeds in it. You see, the modern game is sanitised to within an inch of its life. No Coronavirus could get anywhere near it. It is a brand, a product, and we are its customers. It is a sport shaped (at the top level) to be viewed on TV – VAR has seen to that. It is about money, hence much of the desperation for the season to be completed. Not because it is the right thing to do, but because it is a financial necessity. We easily over-exaggerate as a species how things used to be better in the old days (they weren’t), but wouldn’t the Premier league be more exciting, more interesting with Leeds United in it? Undoubtedly.  So yeah, the Premier League does not need Leeds United as such. Prior to a global pandemic, it was a relentless juggernaut, nothing getting in its way. A financial behemoth, a brand, a premium product that did just fine whichever teams made up its league. The only teams whose loss could damage the brand are not ever going to get relegated, so it is as protected as Fort Knox. Or so we thought, until recently.

Nevertheless, the “brand” could be better. And when I think of how, I think of certain teams. In teams like Leeds, Sheffield Wednesday, Nottingham Forest and more we see kindred spirits, teams that are like us, just without the lottery win. We see how more exciting interesting football could be if they got closer to rekindling past glories. As fans, we tend to have soft spots for teams that we consider of a similar “size”, whatever that means. We have a soft spot whose experiences resonate with us – “that could have been us”. But instead, for many years they had to watch others experience the glory and the experiences that success inevitably brings. City were the friendly neighbour who you have a drink with and maybe even a holiday. Now there’s an Aston Martin parked in the driveway opposite and a “For Sale” sign is up. It’s crazy to think it is 16 years since Leeds graced the Premier League, the fall-out from Peter Ridsdale’s fish tanks and generous contract negotiations proving to be far-reaching. They have no more right to be in the Premier League than any other team of course, but it would be a better spectacle if they were. In a similar vein, I want to see Newcastle taken over by “evil” Saudis. It’s wrong, and yet so right to see football shaken up like that, to read the moral hubris from a spate of football journalists, some of whom seem incapable of applying such high moral standards to their own personal lives. To see the traditional elite see the system they constructed to protect their own dominance crumble before their own eyes. Football is dirty, it always has been, so I’m not going to lose much sleep if its moral high-horse bucks once more. More pertinently, Saudi money is already here, in the UK, so its investment into a football club makes little difference in the whole scheme of things.

Leeds will shake up the league in a different way, with a considerable and passionate fan base, many of whom will never achieve sainthood, nor desire to. Leeds will play Manchester United at least twice, there will be a bit of bother, songs will be sung and we’ll all pretend to be outraged. Like the pretend disgust at Eric Cantona karate kicking a Crystal Palace supporter whilst secretly assigning him instant legend status. And whilst a common hatred of United should be another factor, it really is not. The Leeds United fan base don’t tend to form such bonds with other clubs. However, with them in the top flight we’ll all be far more interested in the matches and in football than if Burnley were in town. And the Premier League would certainly welcome Bielsa. He deserves a Premier League platform. The team are attractive enough to watch, and promotion should see them stump up for Jack Harrison, which can go straight into the Sane replacement fund. It might be needed if City aren’t in Europe for a while.

City and United have only played once since Leeds’ fall from grace, a comfortable 4-0 win for City in the FA Cup in 2013 a clear sign of the opposite directions the two clubs had travelled. Leeds had Ross McCormack and Luke Varney upfront that day. City had Sergio Aguero and Carlos Tevez. Michael Brown was in their midfield. One game in sixteen years is far too few for what is always an interesting fixture. It’s time for that to change. It’s time to shake things up.  As we all readjust to a life that contains football once more, it will take time to have that feeling of normality back. But having a team like Leeds United in the Premier League would certainly be a small step in speeding up that process for me. With nine games to go and a seven point over third placed Fulham, that wish may soon be reality. 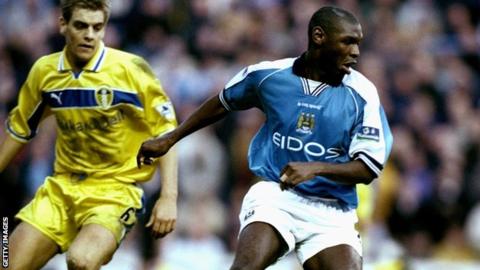