The Ballad Of Stefan Savic

By Mark Meadowcrodt | 15 March 2020
Mark looks back at a player that slipped through City’s grasp.

It’s not the most original thing to say, but Manchester City may be in the market for a centre back this summer. Many names have been mentioned, but we could do worse than the guy playing for Atletico Madrid against Liverpool the other night. He looked the sort we need – likes defending, a commanding presence, unfazed against even the toughest opponents. While we all like cavalier attacking play, it is really the worst thing in the world to want a little bit of certainty in our lives when it comes to the middle of the defence. The thing about Stefan Savic is that his name does ring a bell.

And then I remember. He played for us. And was rubbish. He made Otamendi look like Paolo Maldini and John Stones look like the player we once thought he was. He singlehandedly almost lost us the league in 2011-12. The guy who took Nedum Onuoha’s place in the squad was noticeably less good than the City fan and reliable Premier League performer who was forced out of the club in undignified circumstances that still leave a sour taste in the mouth.

Or maybe we were a little unfair.

Savic arrived in Manchester from Partizan Belgrade as a hugely promising but grieving 20 year old. He had just lost his father in the most awful manner and was then transported to an entirely new city and country. Edin Dzeko and Aleks Kolarov were already at the club and as we know, both are thoroughly decent men as well as fine footballers, but the guy’s life was in turmoil. And then he was vilified for the sin of not being as good as Vincent Kompany at his absolute peak.

Because being Kompany’s understudy was what Savic was paid to do. It’s a double-edged sword. If you are Vinny’s back-up then we all know that you will get plenty of minutes. But you will also be directly compared to the best centre back the club has had in living memory (sorry Dave Watson fans, I know he was class but let’s get real).

The tone for Savic’s short-lived City career was set by a streaky win at QPR in early November. We got over the line, but without Kompany we didn’t look secure. Savic played  but looked very nervous and took most of the blame for an flawed performance, but was that because he played poorly or because the other 10 did less well without their leader? It certainly wasn’t all of the former.

Then Kompany got sent off in the FA Cup Derby match. As a half time substitute, he played his best 45 minutes in Sky Blue in a match as City almost pulled off an improbable comeback with 10 men, but the Derby was lost, so a veil was drawn over that match. As City came back from 3-nil to 3-2 and almost forced a replay, it should have been recognised as a glimpse of what he could do.

However, with Kolo Toure at the Cup of Nations, Savic had the next four games that Kompany would be under suspension for to prove himself. Two league cup semi-finals against Liverpool and league matches away at Wigan and at home to Spurs who were, at the least, on the fringes of the title race.

The problem was that while Kolo’s absence opened up a space in the team for Savic, the other Toure brother was also playing for Cote d’Ivoire. Savic was pitched in to a difficult schedule without Vinny and Yaya in the team. Losing one of those was a big problem even for Mancini’s excellent team but losing both was always seriously tough. Liverpool won 1-0 in a poor game at the Etihad before City won an equally ugly match by the same score on a freezing night in Wigan. Welcome to the glamour of the Premier League, Stefan. Spurs were beaten  – just – in a very open match where City lacked the authority of Kompany and we then failed to overcome the first leg loss in the return at Anfield. In both the latter games, Savic was blamed for a goal and at Liverpool, the travelling fans, put bluntly, got on his back. How sweet Wednesday’s victory at the same place must have felt. He’d done something his team-mates Kompany, Toure, Silva, Aguero, Zabaleta and the rest have never achieved.

Kompany returned and Savic slipped out of the team and eventually off the bench. Given the way Vinny was playing this wasn’t a controversial decision, but those four games against difficult opposition did yield two wins and draw in the absence not just of the captain but also Yaya Toure. In retrospect, that’s not a catastrophe. But the die was cast, and when Savic did get another chance, at Swansea in March, City lost again.

Savic still played plenty enough to collect his winner’s medal and he’s  in the trophy lift shot on May 13 2012, but his race at City was run and it surprised no-one that he continued his career elsewhere. His replacement, Matija Nastasic, was a downgrade and Manuel Pellegrini’s assessment of him was tough but, on balance, fair. Below the standard City needed.

So what does the ballad of Stefan Savic teach us? Above all, it reminds us that “not as good as 2011-12 Kompany” does not equate to “useless” or “waste of money”.  The 20 year Savic wasn’t as good as Kompany then, and nor is the 29 year old version now. But he can still be an excellent player, an adornment to the club. The metric we set ensured he would fail.

And this is true now of our current squad. Ilkay Gundogan can play to a high level the roles defined by Kevin de Bruyne, Fernandinho and David Silva in the City midfield. We’ve seen him do it numerous times and he while, if you were being harsh he was a squad player in the Centurions season, De Bruyne and Ferna’s injuries meant was he was a core performer for the Fourmidables.

He’s not as good as any of the main three in any of their preferred positions but he is an extremely versatile central midfielder of very high quality. Does that make him a poor signing, a player he won’t remember fondly for decades? Of course not. He’s made a major contribution and there’s still plenty of petrol in his tank.

Has Joao Cancelo found integrating into a Guardiola team difficult? Hell yes. But should we be kicking him to the kerb because of that? I would say that would be incredibly short-sighted. If he’s committed to the cause, he definitely deserves at least one more season. Given the way Angelino is playing right now, and to be fair the way that Kolarov continued to perform at a high level after leaving City, maybe we’re a bit trigger-happy with our full-backs.

What about Bernardo Silva and Riyad Mahrez – players whose second years with City have been hugely more impressive than their first. And Gabriel Jesus – the second violinist to Kun, the leader of the orchestra. But a player who has scored major goals for City and may have gone up a level in his performance at the Santiago Bernabeu.

Finally, there is the centre back conundrum. The standard at City is simple. Vincent Jean Mpoy Kompany. Only one recent signing has got close to that standard – Aymeric Laporte. Others have missed the mark by a distance. But the aforementioned Stones and Otamendi are entitled to show us their medals before the discussion of how hopeless they are begins, and we’ve got to cure ourselves of our Vinny obsession. If we see another defender at City making that level of contribution in our lifetimes, we will be extremely lucky. Not as good as Kompany can still be very good indeed.

Stefan Savic’s departure City’s loss and Fiorentina and then Atletico Madrid’s gain because our judgement was too hasty. We all vicariously enjoyed his performance at Anfield and paid due credit to Simeone’s fantastic coaching, but he deserved more than 12 appearances for the Blues, playing in place of rather than alongside the main man. When new players come in and don’t immediately match the standards of the global stars we are lucky to watch in Sky Blue, we should remember his name and a performance that exquisitely annoyed all the right people. 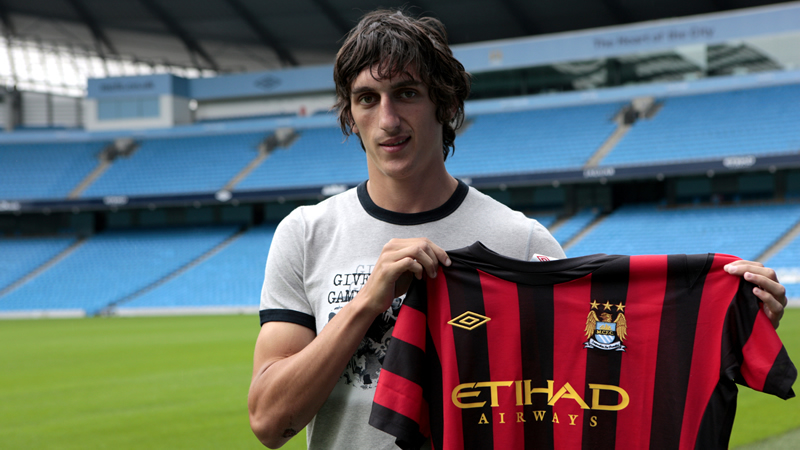