The mailbox is back. And this time, we have set the topic again.

The question is – what is your first memory of Manchester City?

My 1st City memory is the first City game I ever attended. It was March 1990, was a birthday present for my 8th Birthday at Maine Road, 1-1 draw with Chelsea & think it was Niall Quinn’s debut. I’m from Liverpool, my mum/dad/brother are all Kopites, my step dad was From Manchester originally & he supported City & I thankfully followed him. I’d previously been taken to Anfield by my dad but cried as it was snowing & I was freezing, that put me off them, I was also taken to Goodison but we were sat so far back in the Main Stand I didn’t like that either, (quite a wimp as a kid) & it was fate that all this happened & I found my way to become a  City fan.

Earliest City memory: a couple of City players/coaches visiting our primary school to give the boys a training session, must have been 1976. In my mind it was Colin Bell and Mike Doyle, but who knows. The whole class signed up there and then to be junior blues.

Now my school was in Blackpool, and wasn’t anything special, so City must have done a lot of outreach in those days. The last lad I was in touch with from that class (hi Mike Gibbons), last I heard (this would have been about 20 years ago) he had moved to Madrid to be a teacher, and naturally he adopted Atletico as his new home team.

I had a 1976 League Cup winner souvenir kit bag around the same time, but alas I don’t remember that game.

My earliest memory – my Dad taking me to watch City v Burnley in the curtain raiser for 73/74 season, charity shield final staged at Maine Road…which in typical City fashion we lost 0-1 ! A sign of things to come??

My first introduction to City was in the 1965/66 season. We were moved out of Moss Side during this period to make way for the development of the precinct and modern housing. We found ourselves moving to Wythenshawe and befriended by new neighbours who were all City fans. The team was made up some now famous names and others not so easy to remember, the likes of Johnny Crossan, Ken Mulhearn in goal alongside Mike Doyle, Neil Young, Alan Oakes, Glyn Pardoe and late on the season the addition of Colin Bell.

I must have been shown a picture when I was very young because my first memory of City, before I knew what football was in any organised sense beyond playing with a ball in the back garden, was of a colour. My earliest memory is of my younger brother coming home from the maternity unit with my Mum – for any first born that is a moment to put the most horrendous defeat in its proper perspective. But after that, one of the earliest was a very strong correlation between Manchester City and the precise matt shade of Sky Blue worn by Rodney Marsh. It may explain the ferocity of my views on one certain away kit we’ve had to endure this season.

I started off sitting in the Platt Lane end with my Dad towards the tail end of the 1979-80 season, just as Malcolm Allison’s disastrous second coming was starting to unravel. The excitement of walking up the steps before the match, the smell of cigar smoke, can of shandy bass and packet of salt n’ shake every home match without fail, looking longingly over to the right at The Kippax and thinking “I’ll be joining you lot one day….”, failing to see a solitary City goal as everybody had stood up in anticipation and blocked my view…..

The game I can best clearly remember, 1st Feb 1969, City v Newcastle, match abandoned. A tackle on Summerbee starting on the Main Stand halfway line, and finishing, it seemed, in the Platt Lane corner. Going home was grim.  #monsoon

(match abandoned after 41 minutes, with the score at 1-1)

City v Coventry, 1989/90 season. Me and my best friend hanging around the tunnel waiting for the players to come out and warm up. Getting Colin Hendry to sign my programme. Screaming you’re a beast at Brian Kilcline.

Emerging from the steps into the top of the Kippax.

I moved to the UK from the US in early ‘99, lived with a friend who was a mad City fan. The first football match I ever attended was the Wembley playoff final. I fell hard for City then, naturally.

Paul Walsh taking a throw in for spurs just in front of me.

My bro repeating a disgruntled supporter profanity, calling Niall Quinn “wanker” at top of his voice from family stand at Maine Rd circa 1992 (he was 5) to much hilarity for all those nearby.

My first proper memory of City really set the scene for the next few decades. It was 1983, and all I remember is listening to City on the “wireless” as they lost to Luton and got relegated. At least I was prepared for what lay ahead.

The Earl Of Stirl

The two old girls that sat next to us at Maine road that had their half time cuppa in bone china cups and saucers complete with a nip from the hip flask.

My first memory of City was walking out of Main Road (I have no idea what match it was, in the early 90’s to a very toxic atmosphere when the Swales Out movement was at its peak. Guys were handing out badges (either ‘Lee In’ or ‘Swales Out’ I forget which but I remember being more bothered about getting a badge than anything else. We walked through Moss Side with swathes of fans chanting about Peter Swales and although it was quite aggressive, I remember loving it.

My first memory is my first away game when I was 8 years old. 18th May 1963. Down to London on the overnight steam train. We got beat 6-1 and were relegated! I should have known then, although the last 10 years have been a bit of an improvement.

The 84-85 season, and feeling like David Phillips scored a screamer every single week.

Very late November 1966 I think. Our kid had just been born and my grandad had died/ My mum went on the bus to be with her mum, and my dad had a choice of not going to the match, or taking me with him. I think it was a 1-1 draw at home to Nottingham Forest.

I have vague memories of watching the reserves in the mid-seventies, mainly of running up and down the Main Stand steps rather than watching the game. I also remember my first senior game on Boxing Day 1975, when we lost 1-0 to Leeds. Would it surprise you to know that we battered them, missed a hatful of chances and conceded late on from a corner? But I know this from looking it up in later years, and have no actual recollection of it.

My first memory of something I saw on the pitch came the next week in the FA Cup third round tie with Hartlepool. We won 6-0, but what sticks in my mind is the sending off of Dennis Tueart. Having been fouled by one of the visitors’ defenders, Tueart retaliated with a head-butt that broke his opponent’s jaw. I recall this clearly, because I was six years old and my father needed to explain the concept of retaliation to me. He was horrified when I continued to insist that the defender deserved everything he’d got while Tueart should have remained unpunished because the other guy fouled him first. For what it’s worth, you were right, dad! 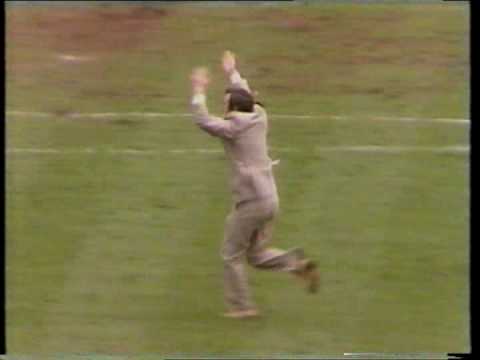