In our second mailbox during the suspension of football, we picked the topic once more. The question was this – what is your favourite non-City footballing memory?

Ajax had been my adopted European team since 1989 ever since somebody bought me their rather garish away shirt from that year. Seeing that wonderful side of the De Boer twins, Overmars, Reiziger, Litmanen, Blind, Davids, Seedorf et al finally achieving what it deserved was pleasing to say the least.

At the time, I cheered the equalizer like it was City playing the game, to see a team do that after being so outplayed in the first half – and I know we give them stick but there fans were incredible at half time in that game – it was one of them where were you moments that no one will ever forget.

Not sure if you’ve ever seen or even heard about it, but for any Australian football fan it’s hard to go past Australia vs Uruguay in Sydney, 16/11/2005. Australia hadn’t been to a World Cup in over 30 years and had some heart-breaking playoff losses in the previous two qualifying campaigns, to Iran and then Uruguay. We’d lost the first leg 1-0 in Montevideo and had Uruguayan players in the media demeaning the country and talking about how they were destined to be in the WC and other rubbish. We held on to a tense 1-0 lead through extra time and went to the most tense penalty shootout of my life, where two immense saves from Mark Schwarzer and a clutch penalty from John Aloisi sent us to Germany. I still get emotional thinking about it. Definitely worth a watch if you haven’t seen it, if you can get past Craig Fosters’ horrendous commentary. That second save from Schwarzer one of the best I’ve seen.

1970 FA Cup Final Replay Chelsea V Leeds.
Stood in the United Road Paddock courtesy of an uncle who was a steward at Old Trafford and one of those “Stretford” nights when the steam rises from both the crowd and the pitch.  Very clear “X” rated memories of “Chopper Harris” taking out Eddie Gray and Chelsea’s Bonetti bundled into the net followed by regular outbursts of players trading punches in open conflict. The ref allowing anybody and everybody to commit the most horrendous fouls imaginable! I know Chelsea took the lead from a goal mouth “melee” and that Chelsea won after extra time but this match is memorable for its “brutality,” and is the benchmark for how and why football emerged into today’s game.

My favourite non City moment would be watching the brilliant Dutch side with Johan Cruyff in the 1974 World Cup Finals. Cruyff had everything and for me is one of, if not the best player ever. Three times Ballon D’Or winner in the unbelievably talented Ajax side that dominated Europe in the 70’s.

This game sticks in my mind for so many reasons. Obviously for that Zidane volley which I think should definitely be in the consideration for the best goal of all time (not the Goat, there is only one of them and his name is Shaun). That Real Madrid side was outstanding. It was early days for the galactico era but still there was Zidane, Figo, Carlos and Makelele to name a few. Zidane was imperious that night and deservedly picked up man of the match. When I look back, I think KDB is the closest to him I’ve ever seen. Also worth noting that a certain 21 year old Dimitar Berbatov game off the bench for Leverkusen, but sadly for them couldn’t prevent real taking the win.

Is it too obvious to say Kieran Trippier’s simply wonderful free kick against Croatia? Probably, but as someone who’s first real World Cup memory is Ronaldo’s wink followed by further campaigns of embarrassment and years of hurt, seeing that goal fly past Subasic was enlightenment. The 115 minutes afterward made it all for nothing but England have never been closer to the World Cup in my life then that goal. From an ex -City youngster too no less.

Troy Deeney vs Leicester in the playoff semi-final, 2013.

From the moment the ball was cleared after Almunia’s double save, you had the feeling something big was about to happen. The unfiltered jubilation and sheer disbelief in the commentator’s voice as he hollers Deeney’s name still gives me goose bumps. The polarising highs and lows of football perfectly encapsulated in the space of thirty seconds. The craziest thing is that even after all this drama, Watford still didn’t even end up getting promoted.

The 1970 World Cup Final was the best game I have ever seen and I still rate Brazil’s 4th goal as the best ever.

Rene Higuita – and the scorpion kick off the line – still the daftest thing I’ve seen watching a football match.

The biggest home game of Cheltenham Town’s first football league season was Plymouth Argyle, on 23 November 1998. Expecting trouble from the green army, the massive police presence restricted disorder to a ripped down poster in The Cat And Fiddle on Whaddon Road.

Cheltenham won 5-2, the standout being the second of the evening from 34yo Neil Grayson, a bustling centre-forward who grew up on Joseph Rowntree’s model housing estate in New Earswick. (Some time later I found my mother-in-law’s book about the place, featuring a photo of a very young Neil in his local youth team, and showed it to Robins manager Steve Cotterill).

The goal started with a drop-kick by Steve Book, nephew of Skip and son of ex-Northampton keeper Kim. Liverpool youth product Hugh McAuley flicked it on for Grayson to volley in from 35-odd yards. All without the ball touching the ground. The goal and the unusual post-slapping celebration can be seen here.

Went to Seville in 2003, when my other team Celtic reached the UEFA Cup Final. 80,000 Celtic fans descended on the city for a massive street party and no arrests. Hope I can follow City to a european final one day.

Can I have two?

Barcelona 4-0 Man Utd, Camp Nou, 1994 – a true masterclass against what at the time were the best team in England. I know we sing about ‘it should’ve been ten’ (rightly so) but the combination of Romario and Stoichkov was so devastating that no one would’ve been surprised if this game had reached double figures.

Netherlands 1-4 England, Wembley, 1996 – the moment football genuinely felt like it was coming home. A victory against a team that had a number of that generation’s top talents (Bergkamp, Seedorf, de Boer) and it felt like England really came together and made them look very average. International football still hasn’t beaten that game for me.

82 World Cup was magical for me as a kid as somehow we ended up in Spain that summer on a family holiday. That Tardelli goal and celebration was so iconic and still gives me chills as I remember the shouting of a load of Spanish blokes in a bar outside Benidorm as my folks enjoyed the local Sangria (and the brilliant exchange rate pound to peseta!).

Bliss was it to be in year 7, have completed by last school exam of the year and be allowed to stay up for this, the greatest, most-tensioned gripped, violent, dramatic, tactically interesting and highest quality World Cup match ever. A delicious contrast of styles with Platini, recovering from the shock of his wife running off a squad defensive midfielder who had been banished from the squad, playing as a false 9 in a gorgeous but slightly fragile team against a deeply controversial but extremely robust, savvy and talented German team set up in a classical libero formation inspired by the half-fit Karl Heinz Rummenigge. A match of two early goals but then nothing as tension built on tension built on tension, the notorious foul on Battiston and then a game that exploded in extra time with France first brilliant and then naive, West Germany first limited and then focused and gifted. 3-3 and then a dramatic penalty shoot-out undersells it hugely, and I was 11 and it was way past my bedtime. The greatest World Cup match I ever saw on almost every metric, and almost 40 years later, this City fan enjoys a game defined by Platini and Rummenigge both end up, in their own way, losing.

I don’t have a precise answer for this, but if pushed the one I would give would involve Euro 96. Looking back, England were only good erratically, but it was easily the best time supporting England for me, across a great summer too, the odd IRA bomb apart. If felt like the country came together for a short period of time, a feeling that would not be replicated until the London Olympics.
Having said that, the Watford v Leicester City play off finalé is pretty damn spectacular! 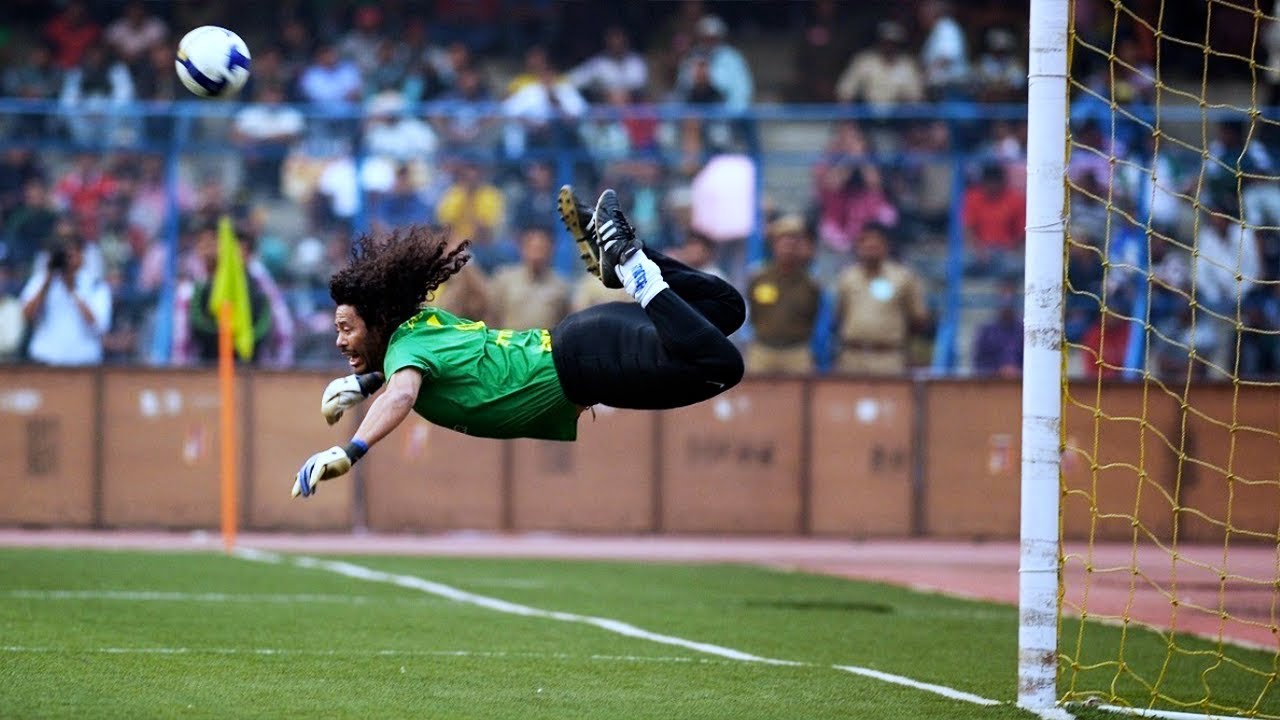