By Howard Hockin | 01 September 2020
Howard wonders why only Pep Guardiola has to prove himself to football journalists.

Get that Citeh bingo card out. It’s been a busy week. The greatest footballer there has ever been wants to come to the Premier League, and that has to be a good thing, right? What a delight to get to watch him in the flesh every week, to see him up close, interview him, write about him, marvel at what he does. The English football press can probably not believe their luck. What an honour. What’s that, sorry? He wants to go to Manchester City? Hmm, 33 years old, massive wages, I think he may be on the wane to be honest. Is he really worth the effort?

Yeah, you knew how all this was going to play out the moment Lionel Messi made his intentions clear last week and the footballing world exploded. The story was so big that even Nottingham Forest supporter Mark Goldbridge could not tweet about how no one cared about Messi moving to City with much enthusiasm. He knows, don’t you Mark (if that’s your real name)?

But then came along one article that really got City Twitter’s dander up. Jonathan Northcroft wrote an article on the possible move accompanied by a tweet wishing that Pep would coach, not spend, his way back to the biggest prizes. We can of course assume that Jonathan will be following up with articles imploring the likes of Frank Lampard and Ole Gunnar Solskjaer to prove themselves rather than splashing the cash. Jurgen Klopp is of course untouchable, so should he bring in a £70m player in attack, he would be commended for strengthening in a key area. And he no doubt would love to, if the money was made available. Much as he would love Lionel Messi to have phoned him and offered his services. Because if that happened, you’d be carting him off in a straight jacket if he had turned down the chance.

Let’s cut to the chase here. Lionel Messi decided of his own accord that he wished to leave Barcelona. Lionel Messi decided he wanted to go to Manchester City and work with Pep Guardiola. City have long been interested in the opportunity to sign Messi, because why wouldn’t they? But they did not tap him up and turn his head. Because they know you can’t do that to Messi at Barcelona. The only way he would leave the club would be on his terms, his decision. City have simply waited, and having learned that they may be able to sign him then changed their approach, and have thus acted as every other club in the world would have done. They have started talking to him and are trying to sort a deal. Because they’re not stupid. This was not Pep’s way of dealing with last season’s disappointments. This was not central to the summer’s transfer plans. This was simply an opportunity that suddenly presented itself last week.

Look, it’s tiresome to repeatedly state the obvious, but it has to be mentioned in this article. This is not paranoia, this is a statement of fact. If Messi was going to ANY other club in the world, and especially one in England, the coverage would be entirely different. There would be no questioning of the deal, no plea for Ole or Jurgen to prove themselves. But it’s City and it’s Pep, and the unique cottage industry that orbits their world. A rotting sneering cynicism not because the world’s greatest player is coming to their league, but because he is going to one specific team.

Hey, if that’s your opinion as a sports journalist, go for it. Play to the crowd, get those juicy hits from non-City fans while writing about City. Many of you truly believe that Pep should prove himself to you, as if his entire career is one long job interview for being accepted by certain scribes. Football journalism is more than ever about opinion because we all see every ball that is kicked, so we don’t need reports, and we have breaking news at our fingertips from a thousand and more sources. It’s hard to stand out from the crowd. So continue with your opinions, it’s your right, just don’t expect me to respond to any of the begging letters asking for financial support. Support comes from those that respect you.

Has any other manager in history had to prove himself like Pep? Was Alex Ferguson questioned for his various big transfer acquisitions? I’m joking, of course he wasn’t. That fraud only won 2 European Cups. There is simply no limit to what that club can spend on players past and present, simply because they used to be really good. Yet Pep keeps signing Scott Carson, so what more do people want?! I wonder how many trophies do you have to win before you no longer have to prove yourself? It seems for Pep, we’re looking at three figures, perhaps four. Because that’s the key to me – Pep did prove himself, has continued to hoover up trophies, but because of just how much he proved himself in his first senior job, now has to prove himself every season. Up-and-coming managers do not have to prove themselves without significant funds, nor do established media darling managers if they sold a player for a lot of money previously so can lean on net spend. So when Pep falters, the vultures circle. In a world where one can only be a genius or a fraud, then any failure must be portrayed as a chronic weakness. This is partly the inevitable reaction to the hype that has surrounded him for over a decade, over which he has no control. It is a typically English trait to build people up to then knock them down, and so many are desperate for Pep to fail in England. The added bonus for some of the English press is that others built up Pep on their behalf, leaving them a free run at waiting for him to slip up. Pep has spent big, so deserves a battering now and then. But that’s only part of the story.

Ask yourself why Messi wants to go to City anyway. It’s not for the climate or proliferation of Greggs. It’s because of Pep. Perhaps the move would have been seen a bit more kindly if Pep himself had been a big factor in making Messi the player he is today and.. oh, hang on a moment..

But it wasn’t supposed to be like this. Manchester City were supposed to be starting a two-year European ban, as their star players deserted a sinking ship. And what fun that would have been for so many to witness. And yet here they are, dealing with Lionel Messi’s none-too-subtle advances. Quite the turn around. So new tactics are needed. Approach B is to denigrate City’s transfer policy by acquiring another attacking player, because it’s the defence that needs attention. This rather ignores two things: the defence has already received attention with one signing and the clear pursuit of another defender and ignores the rather pertinent point that City’s failures last season were down to profligacy as much as defensive woes.

Look, I consider Jonathan a good egg, a good writer and approachable. I wouldn’t bother discussing something Neil Custis farted out. But this is what gets me about spurious arguments about not spending on Messi to improve results. Because this piece was written specifically due to the news that Messi might join City, not another player. There was no piece after Ake signed. I mean, why would there be, when City have been pursuing a central defender for over a year, since the moment Vinny moved on? So why is Messi the unacceptable signing? Why is the better player the one to attract criticism? Would Jonathan be more comfortable if Pep oversaw a number of lesser signings? I’m confused. What if Messi does indeed leave on a free transfer? Is it just as unacceptable to Jonathan because he is, well, too good?! When City are offered the greatest player there has ever been, for free, they should decline said offer because it does not give Pep sufficient opportunity to “prove himself”? Or is the fee not really your problem here? Is the real issue the fact that Pep would be signing a player you consider too good to make it a level playing field? And if that is the case, have you always felt this way, or is it something that magically came to pass in the last few years? Perhaps all these many conundrums were answered sensibly and logically in Jonathan’s paywalled article, but his tweet was quite clear, and I am thus perfectly entitled to respond to that.

Now, this is not some hysterical shrieking because someone dared criticise Pep Guardiola. He deserves plenty of criticism sometimes, like most managers. I am wary of a point Joe Butterfield made on Twitter on Monday morning, that criticism of such pieces rolls over into a blanket whinging at anything critical of the club, making us as fans no better than the Liverpool fan base we all love to mock. But then I look at the pieces and think – no, they deserve criticism. That said, it may be best I don’t comment in future. Even my fairly modest following can mean one tweet can cause a pile-on, as can many of us when tweeting. I want to make a point, but not create a 12-hour slagathon and discussion. I’ve no idea any more what the right approach to Twitter is, truth be told. Here’s the thing. There is an agenda. It is real. It pervades a large percentage of reporting on the club, who are covered differently to everyone else. That is why Barney Ronay’s hot-take this morning involves wondering how Manchester City’s acquisition of Lionel Messi will affect Phil Foden’s chances. Yeah, he’ll be gutted Barney. The “agenda” is undeniable. An agenda exacerbated by a lack of blue representation in the media.

But maybe Pep does have to prove himself in a more organic way after all. You’ll see this in all areas of life of course, in all sports. That’s why Lewis Hamilton was never truly considered one of the greats until he won the Formula 1 Championship in a 1988 Ford Escort. Serena Williams entered the pageant of legends when she won Wimbledon blind-folded. Who can forget Alex Ferguson’s glorious three-year stint at Wrexham, or Ronnie O’ Sullivan winning two World Championships using a chiselled courgette as a cue? History is full of serial winners testing themselves by taking the more difficult route. It’s why United signed Phil Jones.

So buck your ideas up Pep. You cannot be truly considered a great until meeting the set criteria of a handful of sports journalists. Forget Lionel. Never go back, you’ll only have your heart broken a second time. Sign Phil Jones and turn him into the new Baresi, then stop Nicolas Otamendi diving in, and then, and only then, will you have earned your place in football’s Hall Of Fame.
But, jokes aside. You want the truth? Pep Guardiola is human, has flaws, makes mistakes. Nevertheless, Pep Guardiola has proved himself. That’s why the greatest footballer of all time wants to play for him once more, and will abandon everything he knows to make it happen. And that truth is one that is far too unpalatable to mention for many of our country’s press. 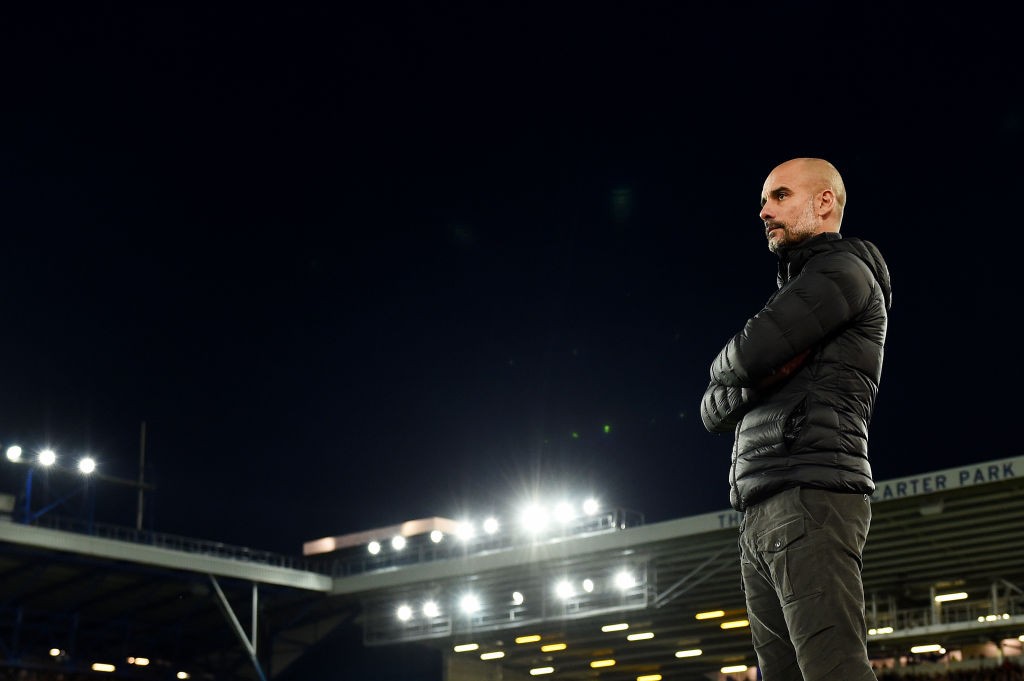