By Howard Hockin | 18 June 2020
As football finally returns, City turn on the style.

And so here we are. This is what is commonly known in the business as a match report. Manchester City played a game of football, and in some ways it felt like we had never been away. City beat Arsenal 3-0, Ederson rampages out of his area, Kevin De Bruyne makes football look easy, Aymeric Laporte wins another game of football. It was ever thus. Football’s constants. And yet it also felt like nothing was or would be the same again, not for a long time at least. The threat of Covid-19 seems minimal for footballers right now, so my stance has softened in recent weeks, City players more likely to choke on a peanut or be knocked out by their own goalkeeper.

As the heavens opened ten minutes prior to kick off and thunder rumbled somewhere in the distance, I wondered if the longest postponed match of my lifetime was cursed. The heavens opened at the Etihad too, but the match survived, and the rain eventually eased off, thankfully. No concerns about a minute’s silence being ruined, and taking the knee was a powerful, evocative moment.

The line-up did not tell us that much to be perfectly honest. It was based on fitness, and Pep had made clear that he intended to make full use of the new rule on substitutes. And he did, as most of City’s senior players got a run out. It was great to see Eric Garcia make his fourth start, though the absence of John Stones even at this early stage is damning. A lack of fitness said Pep, but wandering the streets eating choc ices on match-day is not going to help. These are the games, with the pressure off and the crowd absent, to regain form – let us hope he is in the squad on Monday.

And so the game began, in a near-empty stadium. It was frustrating that Rob Harris gets to watch City when I cannot, but it is perfectly understandable too. Pre and post-match duties were still in place for managers and players alike, and there was things to report that could not be done from home. Still, bemoaning the presence of journalists in the ground is the sort of pettiness that us football fans can always get behind. I just hope the heavy rain did not seep into Miguel Delaney’s lunch box. A Penguin is inedible after it has taken on water, as I learned the hard way.

The early signs did not just dampen the spirits but quash them altogether. City were sloppy, which I could excuse, but Arsenal looked brighter, fitter. Gary Neville commented that they were ahead in their preparation for the match, but why? This was not players returning from World Cups and summer holidays. It just felt weird too. Or did it? But then such feelings are always going to be influenced by the level of performance and the score line. For a while I felt nothing. Or was there something there, was it sadness? Sadness because the game was an achingly clear reminder of the world we are living in right now.  Would I feel differently if City were top of the league? We’ll never know.

The feeling subsided, gradually, despite the piped in chanting, which would have been far more fun if it was used in a wildly inappropriate way. Despite Martin Tyler’s continuous descent into irrelevance, I pepped up. City began to take control, which probably helped, as I remembered the joy this team can give me. This is crux to the rest of the season. For this to work, for me and others to be engaged, it will require high standards of football. Phoned-in performances will soon see any lingering interest fade away, but under Pep that is unlikely. And so as half-time approached, Raheem Sterling scored his first goal of the year, after squandering a great chance not long before, and City had a deserved lead at the break, even if they needed a helping hand, or thigh.

These are different times now. City got a penalty and scored it. I think we know who our penalty taker is now, though if Sergio is on the pitch, it could get feisty. With a man-advantage, even the unknowns of a three-month break or my 35 years of City pessimism could not distract from the feeling that this game was over as a contest, and that is how it proved to be. Some big guns came off and were replaced by other big guns. Phil Foden scored late on, his opportunism a joy to see, and I felt the sadness that he wanted to celebrate the goal as if it were his first ever, but he could not.

Whether this meant everything or nothing, by the end I was mighty impressed by the performance. Arsenal may have been perfect opposition, Arteta clearly struggling to work with the tools he has, and one tool in particular, but the team was soon purring like the old days. They’ve still got it. So that’s seven wins on the bounce against Arsenal, who have been very compliant since they beat us in an FA Cup semi-final, with a combined score-line of 20-2. Yes there was sloppiness, there were misplaced passes, especially in a chaotic opening, but soon the patterns returned and the team once more saw a game out with ease once in a commanding position. After three months without a game, I could ask for no more than that. Against eleven men, it would have been no different. There were no poor performances, with many worthy of praise. Gundogan helped control the midfield and ensure that Arsenal did not have a single shot on target. Mendy was great, and I felt Walker was dominant too. Garcia and Laporte cruised through the game after the odd early scare. Sergio seemed desperate to make up for lost time. There was even a clever free kick routine. Some things remain the same though – the referee wrongly failed to give City two corners in the first half, perhaps realising it would only be a waste of time.

And then there’s Kevin De Bruyne. The defining reason that a two-year ban from Europe matters. Life without El Mago will be difficult, but we knew the day was coming. Life without Kevin is not a life I wish to embrace in any shape or form.

It was almost a perfect evening, until the sickening late collision between Ederson and Garcia. Perhaps there was a communication issue between two players who have rarely played together, or played at all for months, or perhaps it was just an unfortunate accident. Ederson is weird, so detached he barely seemed to register thereafter what had occurred. Fingers crossed that the stretcher, brace and oxygen was merely a precaution, and that Eric is back in action soon. Him and Laporte in defence feels so right. As for Ederson, he continued to spray passes to all and sundry and reminded us why he is so important to this team, as seen when City won the penalty.

And so the City fans did not stream out the stadium and make their way home after a satisfying victory, but instead popped the kettle on as sex-starved dullards and actual journalists bantered about City’s lack of atmosphere. Arsenal Fan TV shouted bruv at each other from a socially acceptable distance, as this brave new world dawned.

I was glad to get the first game out the way, it was a big barrier to me somehow accepting this new normal. It is a hollow shell of what football should be, can be, but that’s what happens when a global pandemic hits. You make do. And that’s all we can do for now, make do, plod on, and takes steps to return to normality. Two of the four managers in action yesterday lost a parent during the break. I cannot speak for them during such terrible times, but perhaps a return to playing some football can have its benefits. And for a couple of hours at least, I could attempt to forget about the outside world. And now I have run out of episodes of Taskmaster to watch, that is no bad thing. 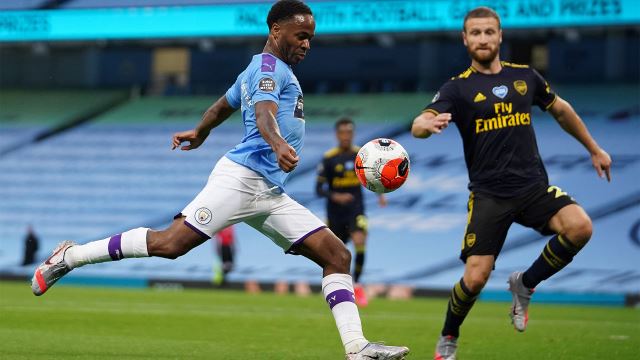