By Howard Hockin | 26 August 2020
Could it be? Howard considers the impossible – Lionel Messi in a Manchester City shirt.

No. Surely not? It can’t happen, can it? The best player of his generation – surely not? No, not Bruno Fernandes, but Lionel Messi – to lickle old Citeh? The club whose name nobody knows? Lionel Messi? Is this a dream? Must be. Has to be. Probably will be. But still….

A predictably dull Tuesday afternoon was certainly livened up with the news that Lionel Messi was about to make a definitive announcement on his future. Naturally, I expected a new contract, or a power play to get rid of club president Josep Maria Bartomeu. And when news came that he wished to leave Barcelona, for free, immediately, a power play is what I expected it to be. And yet here we are the next, day, suddenly I am following 300 Barcelona accounts on Twitter, and the reliable accounts seem to be reporting this: Messi wants to leave whether Bartomeu resigns or not, and City are the clear favourites to sign him.

I’ll repeat – Lionel Messi may well want to join Manchester City. He may even have set his heart on it. It’s even possible he’d crawl over broken glass to make it happen, though such an initiation should not be necessary. Eventually, and somewhat inevitably, the lure of the Arndale centre, Tony’s Chippy and horizontal drizzle was just too much, too intoxicating. You can fight it, but it will reel you in eventually. Wait until he hears about Rudy’s opening a pizzeria in Sale. Just need that beach now.

Lionel Messi to Manchester City was always a pipe dream. I didn’t even notice the occasional links to him. After all, he was so embedded into his football club, that it would take a ridiculous and wholly unlikely sequence of events for him to leave, for any other club. For it to be City wasn’t worth wasting brain cells considering, as far as I was concerned. But on 27th August 2020, the balance shifted. We already knew Barcelona were an almighty mess, but it still didn’t seem enough. But it turns out, it was. Lionel Messi has finally had enough of the circus at the Camp Nou. Everyone has their breaking point.

He could still stay at Barcelona of course. In fact, it is probably still, after everything that has happened over the past 24 hours, still the most likely outcome. Even if he flew a plane over the Camp Nou in full City kit with a banner exclaiming “I AM DEFINITELY LEAVING”, I would still expect him to stay. And so with reports breaking on Tuesday evening that he wants to leave and there is no going back, we all know that there is always the chance of him going back. If this move forces the president Bartomeu out, the chances of Messi changing his mind increase significantly. But the president seems to be digging his heels in, and the newest reports state that he wants to go, come what may. But then, by the time you read this, everything I have said may already be out of date.

Apologies for the crude language.

Look, there ARE downsides to Messi coming to City. If it didn’t happen, there will be consolations to it not occurring. But, come on. Lionel Messi. 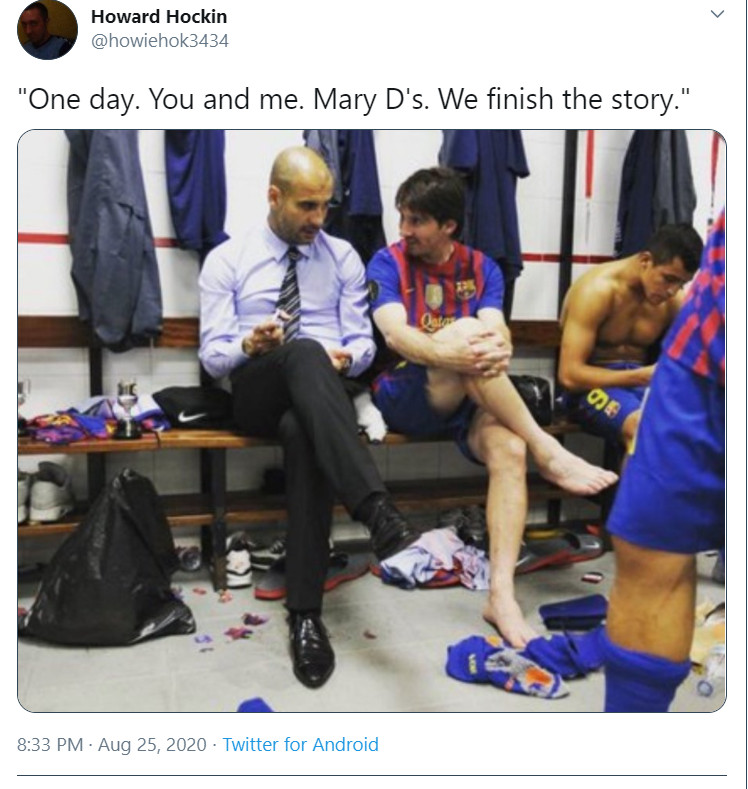 He is 33, but only just. And he hardly relies on explosive long-distance pace. On the wane is he? Quite possibly – after all he only scored 31 goals, with 26 assists last season. Those sort of figures are not going to displace Jordan Henderson as Player Of The Year, are they? This is no George Weah situation, a once-great getting one last pay day before swanning off into the sunset. Messi is still producing the goods. And he’d get to play alongside Kevin De Bruyne. Oh my. Isn’t this everything about being a fan? The hope of something like this coming to pass is beyond my wildest dreams. Being a fan is about the buzz of thinking this could happen, of it ACTUALLY happening. I couldn’t care less if Jayden Braaf’s first team opportunities are hindered. Sorry, his time will come. I’m a world-class pessimist, and I can’t see how anyone could be against this. But then there are fans that would see the downside of Margot Robbie stripping naked in front of them and professing undying love. I mean, could a long-distance relationship really work? Sorry Margot, another time maybe.

That clause that allows him to extricate himself from the club is crucial. I don’t care how many people argue otherwise, City cannot afford Lionel Messi if there is a substantial transfer fee involved on top of the eye-watering wages, bonuses, image rights and more that are part of the Messi package. Yeah they could throw in Gabriel Jesus as a peace offering, but if Lionel Messi thinks he can legally leave for free, why would City bend over? Personally, despite the tough talk of the board about enforcing their perceived right to keep him at the club for another season, I do think they would step aside before long. To tarnish their relationship with Messi is to destroy their relationship with the fan base irrevocably, though that ship may well have sailed. But then Josep Maria Bartomeu has not resigned yet, and his stubbornness may prove such thoughts wrong. If a legal and personal war erupts between player and club, then the chances of a move to City recede with every passing week. As far as Lionel Messi in a City shirt is concerned, it feels like it is now or never. A near-perfect storm has formed, and the opportunity has presented itself. Lionel Messi wants to leave Barcelona. He seems to want to play for Manchester City, and Pep Guardiola. He thinks he can leave for free. For the first time, the impossible seems possible.

What’s more, Messi could take a pay cut. After all, how could money be of any concern to him anymore? But would he? Only he knows what his intentions in life right now are, what his priority is. I constantly read how money is not important to Lionel Messi, but he earns staggering amounts, so it doesn’t entirely tally. Never mind, as he may not have to make sacrifices for City to make this deal work. Because just like when Ronaldo went to Juventus, City will be able to renegotiate sponsorship deals. Especially considering one big one, with Etihad, is up for renewal.  Yes, the wages side will largely pay for itself. Not through that old trope of increased shirt sales – most deals deal with set figures, not linked to how many shirts are sold. But it would be ridiculous to deny that City’s general sponsorship opportunities will go through the roof should Lionel Messi sign on the dotted line. City will, quite simply, make a lot more money if Messi is part of the squad. Not enough to cover what he costs, but enough to keep the wolves, the Hateful Eight and UEFA at bay, for now.

As for disrupting the stability at the club, I could see the point if it was any other player in the world. But this is too big an opportunity to miss. And if it goes wrong, so be it. Big name players could be up in arms at a player coming in that shatters wage structures, as Alexis Sanchez moving to United may have proved. But no player will surely begrudge Lionel Messi earning more than them, not even Kevin De Bruyne. City need to stop pussy-footing around, scared of annoying their best mates over in Catalonia. City did not tap Messi up, they did not orchestrate this whole affair. Barcelona were perfectly capable of causing all this themselves. City need to act, decisively and quickly. After all, Barcelona are currently trying to sign our best youth player, having clearly tapped him up previously, though admittedly City nicked him off Barcelona in the first place.

But there are many other spin-off advantages too. If I was a youth player at City, with any chance of getting into that first team, I would not want to leave when Lionel Messi is in the building every day. It would be an intoxicating place to be, his lure is THAT big. Phil Foden for one is going to have some fun training with the GOAT.  Lionel Messi may well see both Pep Guardiola and Sergio Aguero sign contract enxtensions. It’s just a shame that all this may play out in empty stadia. I’m guessing all those that had no intention of entering ballots for tickets will stick to their principles should Lionel Messi don a sky-blue shirt. I certainly hope so!

If Lionel Messi has set his heart on joining City, and City have set their heart on him coming, then this transfer story has still got a long way to go. The logistics of such a deal are massive, even if he can leave Barcelona for free. But if there is a chance, a real chance, then this is the stuff dreams are made of. A once-in-a-lifetime opportunity to bring to my little football club the greatest footballer I have ever seen or will ever see. And if that does not get your adrenaline going, then maybe this is not the sport for you. Fingers crossed that the impossible dream just became possible. 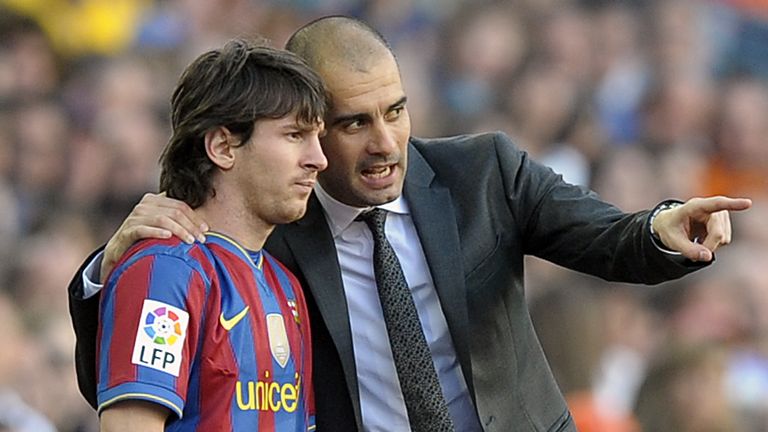