Istanbul We Are Coming: Manchester City's Stuttering Odyssey In Europe

By Simon Curtis |21 April 2020
Simon looks at City’s European adventures. Or at times – the lack of them.

“Would you like to visit Europe’s most beautiful city, Istanbul? Stay at the Hilton, which is one of the world’s most modern and luxurious hotels? Make a grand tour of all the most famous beauty spots – and have the whole trip absolutely free? Well, it can be done – but there is one necessary qualification – you have to be a first team player for Manchester City, who are due to meet Fenerbahce there in the European Cup Winners’ Cup.”

So went the rather droll intro to Leslie Vernon’s piece in the September 7th issue of Goal , the newly launched football weekly that would continue until its amalgamation into the higher-selling Shoot! in 1974. This was a magazine in whose pages a young boy could gape at colour pictures of Terry Yorath (Leeds United and Wales), purchase equipment for enlarging the diaphragm to a breadth agreeable to cartoon females and learn about world geography all at the same time.

Istanbul – a city straddling Europe and Asia I noted – had, ironically enough, also become the target of City’s attention in 2019-20, the season that never ended. As the venue for the final of the Champions League, the Turkish city had long since been earmarked as a possible early summer holiday destination sometime towards the end of May 2020.

Istanbul, then, appears bold and obvious in any grand tale of City’s European wanderings, that Via Dolorosa that appeared to have a chance of ending as a full circle.

By the end of the club’s first ever taste of the European high life in September 1968, the words that would be attached to reminiscence of this delightful city would be humiliated, outwitted and premature. It would take the best part of half a century to pull themselves back together again on the continental stage. A 2020 revisit would have been (“would have been”, there I go again) a nice way to redress the balance and banish some tarnished memories.

In 1968, fresh from winning the league ahead of arch-rivals Manchester United and led by the flamboyant and charismatic Malcolm Allison, there was a distinct feeling in Manchester that City could do practically anything they wanted. Allison, pushing the boundaries on a daily basis for the term larger than life, had instilled a cockiness and sure-footedness in the squad that meant self-confidence was not in short supply.

Allison’s coaching instincts, honed in East London under Ron Greenwood and alongside many who would later influence the game from their own leather-backed swivel chairs* and developed after studying the Magnificent Magyars Hungary side of the 50s, meant City played with a swagger and drive that most opponents blanched in front of.

The European Cup represented a totally new venture for a City team that had by now mastered the prosaic tactics of West Bromwich Albion and Nottingham Forest, but had had little opportunity to measure themselves against the might of the continent. Or indeed Fenerbahce. What persuaded Allison to utter his infamous “cowards of Europe” speech, in which he promised that the frightened clubs of the continent wouldn’t know what had hit them when City marched into town, is unclear. Bravado? Yet more Veuve Cliquet? A burning need for attention? Who knows, but the utterance weighed City down like a sack of chick peas  attached to a hamster for decades to come.

Like many of Allison’s quotes throughout a rumbustious career, the words were partly aimed at bolstering the confidence of his own players, rather than disparaging those of the opposition. However, as with his habit of marching towards the Stretford End before derby matches and raising the number of fingers he predicted City would win by, his antics could be read as slightly unpleasant arrogance, if you were not a fan.

Brian Clough and, to a lesser extent, Don Revie and Bill Shankly would also demonstrate similarly cocksure qualities, but in the dawn of the 70s, Malcolm Allison was surely the game’s number one protagonist of what would decades later become known as mind games. The territory occupied by Alex Ferguson in the 90s and 00s and briefly by José Mourinho at Chelsea, before his scowl took control of things, was already being carefully mapped out by City’s boss in the late 60s.

Allison carried it all off with a boyish grin, a clutch of blonds and the ever-present magnum of champagne. Under a cloud of purple cigar smoke, his words swirled invitingly towards the assembled hacks, who loved the man for filling their columns with highly usable quotes. Allison was a journalist’s dream. He liked a drink, never knowingly turned down a night out and wasn’t afraid of idle chat turning into loose talking. In those days, an inner circle held court and knew what to print and what to bury. Allison survived relatively unscathed, owing to the mutual need cemented in the relationship.

It was around this time City announced they would be laying kilometres of pipes under the Maine Road pitch to avoid winter postponements. Hot air was obviously a theme not restricted to the daily press briefings.

The big man’s dreams of lording it over Europe quickly came to fruition the following season, with the motley bunch of Linfield, Honved, Academica de Coimbra, Schalke and finally Gornik defeated in a heroic run to the soggy Vienna finishing line. But this was the Cup Winners Cup, a quirky distant cousin to the preening, prancing European Cup, where the big boys played and where City and Allison had fallen decisively on their noses the year before.

Still it put City on the map. Mancunian red and black stripes, sticking to the soaked chests of Tony Book and George Heslop in the Prater Stadium, were suddenly hoisted up alongside those of AC Milan. Indeed, ten years later, in sky blue, City would walk tall in the San Siro against Milan’s own red and black stripes, in a majestic 2-2 UEFA Cup draw. Drawing in Milan in those days was a little like winning in Madrid today.

City had arrived, but the 70s did little to cement this idea. First round defeats to Valencia, Juventus and, embarrassingly, Widzew Lodz, put paid to any ideas Peter Swales may have had of empire building. Instead, with one last grunt in 1979, the lights went out over Europe. In that 78-79 campaign, City shook off a resilient FC Twente (with Frans Thijssen and Middlesbrough-bound Heine Otto playing), thrashed a decent Standard Liege side and wiped the floor with the aristocrats of Milan before succumbing to Udo Lattek’s excellent Monchengladbach side of the time.

It was no disgrace to go out to a German champion, who housed the likes of Alan Simonsen, Kalle Del’Haye and Henning Jensen in their stables, but Allison’s grand dreams were in tatters again. His second coming would end within months in disaster and recrimination, while City’s progress in Europe would undergo one of those little pregnant burps that sometimes happens to clubs of this ilk.

Suddenly, though, in true City style, we were back in. 2003 Fair Play champions no less. This was the prize for all those missed tackles by Paul Bosvelt. Total Network Solutions. From Wales. Only a trip in a fishing boat to the bloody Faroe Islands could possibly be more ridiculous. Hold my pint of Brains.

TNS for short. Beaten 5-0 in the City of Manchester Stadium’s first-ever competitive game, the return leg was considered so low key, City rolled out Willo Flood, a pre-Stoke Glenn Whelan and Cristian Negouai to hold back the green and white hooped deluge. These were Kevin Keegan’s continental foot soldiers in 2003.

There were of course many more embarrassments to come. Groclin Dyskobolia, a team that hadn’t existed as a Polish force before and doesn’t exist as one anymore (they appear to have only been brought onto the big stage to briefly produce another lively chapter in City’s Tales of the Totally Unexpected), put City out. Not before Steve McManaman had beaten the UEFA Cup all-comer’s record for pointing enthusiastically against Lokeren in the first round proper. This a game in which David Safe Hands Seaman finally buried his nickname and the Sun didn’t rise on Jihai.

Slowly but surely, the comedy element has been eked out of the story. The fishing smack left Aberdeen for new frontiers and Denmark was visited three times in the same season. There were grass allergy issues for Mario Balotelli in Kiyv and a brilliant start in Hamburg was the prelude to more high profile let downs, but these japes becoming distant memories now.

City’s Champions League pedigree has grown and grown, uneasily, unsteadily, but to a point where – when the big black viral curtain came down – Real Madrid had just been played off their own sumptuous Bernabeu pitch by our boys in blue.

Allison’s “We will frighten the cowards of Europe speech still sits uneasily with most of us despite it belonging to a bygone age and perhaps City will never properly find their place in Europe, but where we left it at least, progress had been made. That a combination of a global pandemic, the ongoing rumblings of Financial Fair Play and a date at the Court of Arbitration for Sport now throw everything into deeper doubt is but another small delight in the topsy-turvy story of Manchester City in Europe. Istanbul, it seems, can wait.

*Phil Woosnam, John Bond, Dave Sexton, Ken Brown, Noel Cantwell and John Cartwright would regularly meet at Cassertari’s, around the corner from the old Boleyn Ground to soak up Allison’s salt and pepper pot tactics. It was Allison, who first introduced steaks as pre match meals and persuaded Hammers manager Ted Fenton to play John Bond and Noel Cantwell as the First Division’s first overlapping fullbacks. One-touch football was one of Allison’s pet projects too. 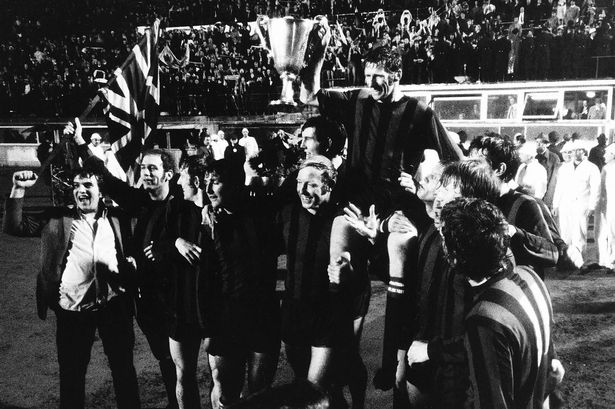