By Howard Hockin | 24 May 2022
Howard thinks about another amazing day as a City fan.

This club take years off you, yet somehow make it worthwhile. Update that will, in preparation for when when City finally finish me off. This team of superstars, led by a generational genius make the sport look ridiculously easy much of the time. And yet when it comes to the crunch, it often feels like the opposite. Because everything must be done in the most tortuous, stressful, panic-inducing manner possible.
And I wouldn’t have it any other way.

To be honest, that’s the life of a football fan. City are not unique in that respect, but the way they win titles at home on the final day of the season occasionally is. Roll on 2032.

What a few days. I am exhausted, for all the right reasons. And what an enlightening few days too. I was out for someone’s birthday on Saturday. There were United, Everton and Stockport fans in attendance, and there was a consensus that City had to beat Aston Villa for the sake of football. None of these supporters like City of course, and nor should they. However, the alternative to City winning the league was too horrific for them to deal with. For the sake of balance, there are caveats to that of course. I would not expect Everton fans to be behind Liverpool’s quest for glory, but United fans are a more interesting case study. Taking the side of City is telling, though perhaps partially due to the tacit acceptance of City winning leagues, in the same way United’s many titles barely affected me as a youngster as it was such a normal part of my life. But as we chatted about the following day’s match on Saturday, despite my protestations, it dawned on me.

Are we the good guys?!

Probably not, and nor should we care. What City did on Sunday might have left us all exasperated, but it damaged a planned narrative. An easy win over Aston Villa, even if it still meant City winning the league on the final day, would have allowed the narrative that City’s wealth was bound to succeed in the end. But City made such hard work of it, that it is now harder to say that, though naturally many will try – not naming names. It was a match that shattered the narratives into dust. It was also a result that told us much about fan bases and how you can learn more about a person during adversity than during the good times. Something a certain fan base could give some thought to – it might even lead them to a smidgeon of self-awareness in the future.

But back to the match. It was a strange 90 minutes. At no point were City not top of the league on the final day of the season. It’s a strange sensation to feel your team has blown the league, whilst sitting at the top of the tree. But like United at Sunderland, a Liverpool victory seemed inevitable. In the end, City did get over the line, ahead of a Liverpool team that spent fewer days at in 1st position last season than Manchester United. Sometimes, stats don’t give the full picture. And sometimes, football makes no sense. It made no sense in injury time in Madrid a few weeks ago, and it made no sense on Sunday. Seventy-five minutes of nervous, timid football and a fanbase labelling them bottlers online transformed into a feeling of inevitability. Where did those goals come from? I’ll never work it out. One happened, and the others naturally followed perhaps. They were intrinsically linked. And this time, City knew how to see a game out, with consummate ease. The manager cried, and so did many of the fans.

As I said ten years ago, I never want to have to go through that again. But how much poorer would our history be without these two days, the two most dramatic Premier League title wins of them all, and they’re ours, played out in front of us in glorious technicolour, providing stories you’ll tell your children and their children for the rest of your life, even if City have helped shorten it.

There was no better place to be to experience it all for me. With my friends with whom this journey of several decades has been taken. It was emotional at the end, it was precisely what being a fan can feel like. Nothing compares. Nothing. Offer me an hour in the dressing room at full-time and there’s not a chance I would have accepted. It’s been a tough few years for us all, and this one meant so much. It was the first collective experience of real joy and celebration we’ve had together, it felt like we’ve finally come out the other side. It will live long in the memory, only beaten by that ridiculous, fantasy day a decade ago. Sunday was also the 5th anniversary of the Manchester bombing, an event I will always struggle to comprehend or even discuss, and I thought about that as I made my way home, I thought about a day of many emotions, and trying to gain perspective when following a football team, and I thought about being thankful for my lot, because I have so much to be thankful for. Ten years ago a passer-by took a photo of 30 of us, stood outside the Angel pub, before we went to meet our destiny at the Etihad. And before the Villa match, in a different city centre boozer, we did the same, with many of the same people, the same friends, brought together by a common passion, a common love. Both times, we could not have imagined what lay ahead, and it’s best we didn’t know.

And yet, despite all the beauty of Sunday evening, I’m glad it’s over. A trip to the trophy parade and then a couple of hours in the presence of Nedum Onuoha and the Blue Moon Podcast crew, brilliantly hosted by David Mooney, finished off the extended weekend of celebrations. But before the match, I was in a very different place. Friends in the pub before the match commented that my nervousness, wrought large on my face at all times, was spreading to others, and infecting the camp. I wasn’t far off being exiled to another part of the building. Now, I am just exhausted, and as ever ready for a summer break, a summer once more defined by the final day of a football season. The months ahead look different, very different, to how I pictured them at approximately 5:30pm on Sunday afternoon.

I can take failure. I can accept a season where not everything works out, because that is the life of a football fan, however good your team is. There will always be disappointment. But with City, every title charge seems vital, seems necessary. There’s always a reason or ten in my head why this one matters as much as any other, and if we can just get over the line, then I’ll never ask for anything again. So this time around, there was the obvious Liverpool narrative. Firstly, if City had failed to beat Aston Villa, the lie that City blew a 14-point lead would weave its way into football folklore. History is written by the victors after all, and to hell with the nuance of facts. More importantly however, I was convinced that if Liverpool won the league, they would also win the Champions League next weekend. And a Liverpool quadruple would live with us all for ever, whether we liked it or not. It would be airlifted in to every discussion about Premier League greats, every Liverpool/City discussion, it would be incessant, because naturally it would mean every rival fan finally having to concede what Liverpool fans have demanded we accept for years – that they are the bestest of the bestest ever, and now they would have proof.

Ultimately, what is the value of that feeling when the full-time whistle went, or the three key moments that preceded it? If only you could bottle it up, then drink it in.  The feeling it gives you cannot be defined or measured, nor replicated in a laboratory. A unique sense of euphoria. I even broke my golden rule of never speaking to other men whilst stood at a urinal, I shook my head in disbelief towards at least ten passing strangers. We all experienced this together, wherever we were. Apparently Gary Neville said off-air it was the loudest noise he had heard in a football stadium. Like in 2012, I don’t remember the noise. I remember the faces, the joy, the movement of bodies, the carnage. Joy and relief replacing despair.

I can’t really do Sunday justice with words alone. So all is left to dip into my recent book, and paste in how I tried to describe THAT moment in 2012. It’s the closest I will ever get to trying to make sense what being a football fan involves. I can’t imagine a life without all this, even if it has taken me to some dark places. I mean, imagine not liking football. Just imagine.

In one split-second, one singular moment in time, I am detached from the real world. This cannot be real, surely? This did not happen. How could it? I was at rock bottom, lower than I have ever been before, to a place closer to hell than five relegations could ever take me. All around me, there is something happening that I know instantly is never to be repeated, never matched, never beaten. In basic terms, pure, unadulterated carnage. Bedlam – there’s another word, and joy like I have never experienced before, and perhaps never will again. I am hugging three friends at the same time. I am hugging strangers. I am moving in random directions, I am in the row behind, I am in the aisle. I am bouncing off seats, and it hurts, and I could not care less. The hurt is over. A guttural sound that is unique to this moment in time resonates around the entire ground. I notice the faces of those beside me, wide-eyed, pure happiness, the faces of those who, and this is no exaggeration, have seen their lives transformed with one swing of a boot. Wild screams, arms raised to the heavens, uncontrollable, unrehearsed, unbelievable. None of us know how to act so we revert to primitive beings. A friend appears from nowhere, one who was sat ten rows away and he jumps on my back. I don’t know where I am anymore. Songs spring into life, but it is mostly still screaming. I take my first glance towards the pitch since I last looked to check the linesman did not have his flag raised. The scenes on the pitch are similar to those in the stands. I will relive this moment a thousand times, but it cannot match what I feel right now. Bottle it up, and drink it in. I wish I could. I’ve fallen in love all over again.

This – THIS – is how it can feel to be a football fan.

Howard’s new book – Twelfth Man – about being a fan during City’s historic 2011/12 season is now available on Amazon on Kindle and in paperback. 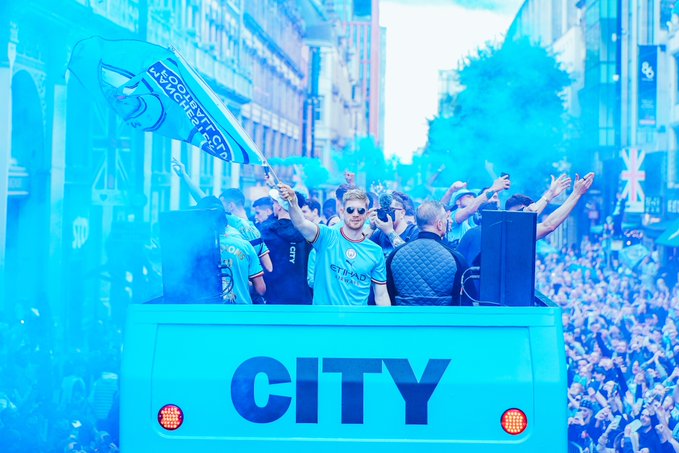