How Manchester City & Football Saved Me From Depression

By Ste Tudor | 17 May 2020
In a candid and honest piece, Ste looks at how football and City proved to be his saviour.

At any point in the early to mid-2000s, on the occasions I would bump into someone I hadn’t seen since school they would unfailingly mention Manchester City. Supporting City is what defined me as a kid. That’s who I was. The kid utterly obsessed to the point of travelling the length and breadth of the country to watch his heroes and bedecking pencil cases in anti-United graffiti.

Understandably then, in this familiar vignette where two near-strangers encounter each other down a supermarket aisle or high street and social etiquette demands a brief conversation, the club’s fortunes acted as a handy opening gambit for them and realising this I’d suppress the nervous nausea that rose in my belly and reluctantly play along. I’d acknowledge that weekend’s defeat with a half-smile – a result that had somehow filtered through my carapace of all-consuming depression – before averting my gaze and unconvincingly insisting that it had been good to see them again. Then I’d swiftly move on, back to safe obscurity.

I wasn’t being rude. Really I wasn’t. It’s just that, for those five or so years, making eye contact and small-talk was hopelessly beyond me and the big talking point on that particular day wasn’t the Goat’s missed sitter last Saturday afternoon; it was that I’d managed to get dressed and leave the house.

A typical day for me around that drawn-out period entailed waking up mid-morning and making the first of a copious amount of brews before lighting the first of forty or more roll-ups. I’d then turn on the television that for the rest of my waking hours remained largely unnoticed, an alternative universe airing to my alternative universe, and I’d curl into the foetal position with a hot water bottle pressed hard against my tummy, and I would cry. This didn’t happen every day for five full years. But it was a typical day.

A long-term health condition, coupled with a traumatic experience, had eroded who I was. It worsened week on week through staying exactly the same, bleeding into months and eventually years until I was completely broken. My mind was stuck in obsession, playing out a constant loop of worst case scenarios. For those fortunate enough not to have experienced this I cannot begin to describe how exhausting that is.

Prior to all this my life centred on – in no particular order – City, girls, mates, music, socialising, and working in dead-end jobs to pay for it all. Now the mere notion of me ever living a ‘normal’ life and being a ‘normal’ person again was as far-fetched as a lottery win.

One random morning a friend of mine was driving to work when he impulsively turned off at the next junction and instead headed to my house. He’d been worrying about me a lot lately. When his knocks went unanswered he let himself in and found me curled into a ball on the sofa sobbing my heart out.
“You need help,” he said, his initial shock giving way to blokey awkwardness.

So I sought help and it helped. A bit. The first psychologist proved to be a hideous mismatch – a Dr Melfi from the Sopranos type only stripped of all human empathy – and if there’s any advice I can dispense on Mental Health Awareness Week it’s that should you seek out professional assistance please consider the process as them auditioning for you. If it doesn’t work out it is never, ever your fault. The second guy swore, laughed, and had a signed photo of John Barnes on his wall.

So I told him everything. How I spent half my time imagining that I was living underground, in a bunker with supplies far away from the rest of the world. I knew the lay-out intimately. Every item of imaginary furniture. How I’d compiled my ‘set-list’ for my funeral and that was pretty much all I listened to these days.  How three months earlier I’d scavenged every painkiller and aspirin in the house and laid them out on the bed before downing a bottle of vodka and vomiting all over them.

One session, out of the blue, he asked me to imagine my life without depression. What would I like to be?
“I want to write,” I said. The response equally stunned the both of us. Where the hell had that come from?

For narrative purposes I’d love to say the counselling – and my sudden and entirely unexpected intent to blog – was a turning point followed by a dramatic upsurge in circumstance but of course life is never that tidy. I gradually got better mainly because of time; through being sick and tired of being tired and sick.

I’d also love to claim that my love for Manchester City was restorative but that also wouldn’t be true, not in the midst of my despair at least. In my bleakest moments I was twice coerced to the pub to watch City play and each time I sat numb, as disconnected from my club as I was to everything else despite this being the Keegan era when even neutrals were entranced by their all-out attack.  On one of these occasions – a derby no less – my Liverpool-supporting best mate took it upon himself to ‘be me’ for the afternoon, shouting encouragement and abuse at the big screen while I hid hollowed-out in the corner. He even sang Blue Moon with gusto. I’ll love him forever for that.

Popular culture however did manage to break through. Twice in fact. The first time it defined my situation, the second showed a way out of it.

In an episode of The Simpsons the grandpa wins a small fortune and decides to spend it enjoying the rest of his life. He is shown on a roller-coaster; he is seen playing craps, and all the time his face is set to boredom. ‘That’s who I am,’ I thought, absorbing the realisation with complete indifference. ‘I am incapable of feeling joy’. It feels very strange writing that sentence now. Another world, another life, another me.

Sometime later I am half-watching Porridge and Norman Stanley Fletcher is imparting a pearl of wisdom to his new cell-mate Godber about surviving in prison. “It’s all about little victories,” he says with cockney conviction. The phrase is a lightning rod. For the first time in a long, long time I am jolted into sentience. I’ve found a mantra.

The following morning I got dressed and ate breakfast. The day after I recall making a list, of things I planned to do but ultimately never would. That didn’t matter though. Not a jot. I’d made a list.

Later still, with my outlook slowly shifting and the ghoulish omnipresent depression now a foe rather than a comfort, a thought suddenly struck that had me tentatively climbing the steps of my self-dug trench and venturing into the scary world: if I’ve got nothing, then I have nothing to lose.

If the narrative so far has not been neat then now it was. Within a week a mate had sorted me out with a website that I called the ‘Daisy Cutter’ and I began to write voraciously about City and football. I started going to games again. I started abusing referees again and have a pint on the way home and laugh and argue about a player’s merits again. I wrote and I wrote, my love for football returning with a fierce vengeance that roared at my depression until it timidly retreated to nothing, revealing itself to be the cowardly piece-of-s*** it always was.

Knowing nothing of my circumstances Blues helped me out far more than I can ever give justice to here. They contributed article after article for my site. They helped set up interviews. They encouraged. Most of them I have never met and some of them I will never agree with but they’re family.

With memories of perpetual drawn curtains and emptiness still on the raw side I found myself interviewing my childhood hero Paul Lake, Dennis Tueart, Shaun Goater. I found myself being filmed in Carlos Tevez’s corporate box for a video where I appeared alongside Noel Gallagher. To my brother’s utter bemusement a stranger once shouted out my then online persona as we passed outside the Etihad. Some time back a lady got in touch via social media, with a name I didn’t know because she had recently got married. “Hi, remember me from school? Did you write that thing about The Sun? My husband read it out to me and I recognised the name. He’s taking it to work tomorrow to show his mates”. Ten years ago I would have bumped into her in Tesco and stared at the floor.

I wrote and I wrote and I got good and the confidence that came from that fed into every other area of my life. Yet even after the bad times had long evaporated I needed something symbolic to properly move on, to attain what the American’s grossly call ‘closure’.

Which brings us to the 2011/12 season, to the final day of the season where myself and others organised a ‘City pub’ in town for those that couldn’t get a ticket to the game. I realise now that I invested far too much into that surreal year and perhaps due to City playing such a prominent role in my recovery I emotionally tied together their search to end years of struggle with my own. Which is pretty stupid really, not to mention egotistical.

Regardless this is a photo of me moments after Aguero shook the planet to its foundations. Spilling out into the street I cry for the first time in several years but they’re altogether different tears now. I’m weeping for the past.

Little victories are key. Norman Stanley Fletcher taught me that. But sometimes big victories don’t half help too.

If you’re struggling to get through your days right now please tell a friend. You’re truly not alone.

Thanks to Ste for this piece. It was originally published on the Unibet website, and has been republished with their permission, as part of Mental Health Awareness Week. 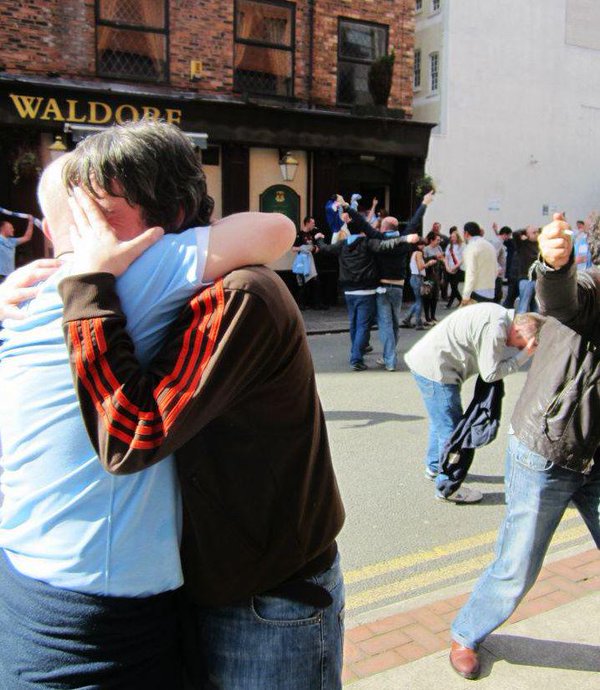