You’ve probably noticed already, but there’s no football at the moment. Well, there is some in Belarus, but I am not going to pretend to be interested in Slutsk. Provide your own punchline. As we all struggle through this daily grind, I thought I would re-work an old article lost in the ether. An article about the simple pleasures of football, at a time when I miss them more than ever.

Walking out into an empty football stadium

We have probably all experienced this. Whether attending a function at a ground, going on a club tour, or perhaps you just forgot to leave after an actual match. But there’s an eternal thrill experienced  looking out over an empty football ground. Insert your own emptyhad jokes here. The grass, the stands rising up above, the staff going about their daily business.
Evocative.

I used to have to go to government meetings held at Leyland football club. It was only a small club, in the scheme of things, but always had the lushest of green pitches. The meeting room overlooked the pitch, and I’d day-dream many a tedious meeting away gazing at the pitch, re-enacting fictional winning goals scored by yours truly. Some were diving headers, spectacular free-kicks, delicate chips or just a thunder-bastard from 35 yards. The goal celebration was always understated. Playing it cool and all that. Half of the time was also devoted to spectacular saves that I too made. In my imagination I truly was the greatest all-round footballer in history. Weren’t we all?

Subsection: Walking past a stadium during a match.

I used to go on cycle rides when bored, in random direction from Sale. Sometimes up the canal, to Lymm, but once I cycled past Old Trafford as a match was in progress. It’s a surreal experience. There’s a muffled noise from inside, which occasionally rises to much more, according to the quality of performance, or whether the referee’s having a ‘mare.
The vendors outside, some passing time, some packing up.
An eerie silence of sorts, considering what was occurring so close.
But still plenty of people milling about, all with different purposes.
I stopped to soak it in for a few minutes. I need to do it again soon, though I get more enjoyment actually watching United matches nowadays.

A football rolling towards you

As I walked down a street the other week, as part of my government-approved exercise regime, there was a football just resting on a pavement, without a care in the world. Children played nearby, but showed little interest towards it. A man washed his car. Whose was it? I couldn’t, could I?
It took all the willpower I possessed not to wellie it as hard as I could.
Anyway, there remains that primal buzz when I see a football roll my way. What follows is the eternal dilemma of how best to deal with this situation. Was it rolled to you by a friend? Was it a mis-hit shot from a nearby match? Has it just rolled off a roof? So many questions.
But the urge is there – to hit it, and hit it hard. Hard and clean. Swing that leg, like you used to do every week in that title-winning 5-a-side team that swept all before them. I was a great keeper in that team.
I digress. Maybe you want to control it first, take the chance of doing a few keep-me-ups in public view before volleying it back from whence it came. Risky, but kudos is guaranteed if it all goes to plan. You can always blame inappropriate footwear if it all goes horribly wrong.
But this buzz is not restricted to football, to a football. As a fan of sport in general, pretty much any sporting equipment gives me a buzz. Is that weird? Not sorry if so.
I got a new badminton racquet last week, and there are few better feelings than holding it for the first time. Hearing the whoosh as you swing it through the air. Or a new cricket bat, without a mark on it, or holding a cricket ball, imagining you are an off-spinner about to utilise that bit of rough just left of the stumps.
Ok, I admit it, I’m weird.

A 97th minute goal by York bringing your accumulator home

Bet responsibly, folks.
My weekly £5 accumulator bet tends to go only one way, but when it does come in, every three blue moons or so, it never seems to be easy. Every winning bet seems to have relied on a late, late goal from the lower divisions. But what better way to bring it home? I mean we’d much rather relish THAT Aguero goal than a comfortable 4-0 win over QPR, right?
Right?

Leaving a stadium after an important win

Maybe this is a bit too “obvious” or mainstream for the list, but it’s something I rarely, if ever, talk about. And when I think back to last season, and that epic run-in, I often don’t think about the goals or the key moments, I think about after the match. The walk down the three flights of stairs from the 3rd tier of the south stand, the look on other people’s faces, the conversations I pick up on the breeze, the electricity as people criss-cross outside as they begin the journey home. That’s what being a fan is about – experiencing moments like that.

A ball rattling the (underside of the?) bar

It’s the sound, the thud, the vibration. All the better if it’s been raining and the water is shaken off like a dog exiting a river. What happens after that is almost irrelevant, though if it bounces down on the line then spins back into play there’s bonus points for that. A rarer beast, but just as enjoyable, is a shot that cannons off both posts. Bit rare them though, lost in the annals of time along with white dog poo, salt and vinegar Sky Divers and Manchester United’s DNA.

I really get a visceral thrill listening to a co-commentator squirm, especially if it’s one I do not like. The situation is usually thus: he is watching a replay of an incident and it quickly becomes clear that he has called the incident wrong when originally watching it. This separates the men from the boys. We’ve all called incidents wrong a million times, and the sensible thing to do is simply state that, actually, the incident is not as you first thought. But there are a breed of co-commentators out there that simply refuse to do that, as if it makes them look week and devoid of knowledge if they admit to have seen something wrong. And so they dig in, with pitiful excuses, or occasionally complete radio silence.
Then I shout obscenities at the TV, call the offender an arse on Twitter, and feel better for it.
Love it.

Entering a ground for the first time

For some of you, this will mean more than others, especially those trying to tick off every league ground in the country. My record is poor, like my wage, but the thrill still remains when entering a new ground. The thrill of trying out my new seat at the Etihad 16 years ago was as big as the kick in the guts knowing I was leaving Maine Road for the final time just months before. Well, almost. I only ticked Burton off last season, which was underwhelming because I was injured and it was bloody cold. The thrill was still there, including standing on a terrace again, and even a flare being let off in my face could not diminish that.
Much.

Subsection: seeing a football stadium whilst on a foreign holiday
The Great Strahov Stadium is a stadium in the Strahov district of Prague, Czech Republic. It was the largest stadium in the world and is the second largest sports facility worldwide after the Indianapolis Motor Speedway, seating around 220,000.
It’s looking a bit worse for wear now, and is used for pop concerts and training, but I was still intent on seeing it when I went to Prague, and thankfully it was on the route back to the airport. And in St. Petersburg, I took off intent to find the Petrovsky Stadium, with the added thrill of seeing a City scarf for sale in a dusty club shop nearby.
And there is a thrill in seeing stadiums abroad, where they seem to have some extra mysticism to them. Any sports stadium will do to be honest. In fact, I still get excited passing the Bescot Stadium on journeys down south.

The last time? That was 13th June 2019! Who knows when the next one will be though? Yes, it’s the big day when you get to see that your team plays 19 other teams twice, as you always suspected. But of course there’s a bit more to it than that. Who do you open with? What’s the run in like? What’s the Xmas schedule? Please don’t have a home game on New Year’s day. When is the derby? When are the Liverpool games?
Yep, when the fixtures are out, the next season feels within touching distance, even though it isn’t. All that was left, as champions last summer, was to await Sky’s Premier League Years, and the top banter when Liverpool sold more tickets for the Community Shield.

Who knew that hugging a pot-bellied middle-aged man could be such good fun? And that’s just the experience for whoever is sat next to me at a match. The sheer unadulterated joy of celebrating a much-needed goal should never be underestimated. It is the essence of being a sports fan, and it may take some time to experience that feeling again.

I once asked City twitter what their simple pleasures were:  Their replies included the following:
The moment of silence after a player has smacked one from 30 yards waiting to see where it ends up, saying “it’s in this” ahead of every free kick then looking smug when 1 in 100 goes in, Phil Jones’ face, taking the piss out of away fans celebrating a goal that wasn’t a goal, shouting “shit” in the derby when the other lot shout “United”,  white netting, not hung too tight, the first view of the pitch every match, watching a centre back celebrate passionately, air kicks, going to a match in shorts and T-shirt, fuller-figured footballers, complaining about the service in the concourse, shouting “man on”, a goalmouth scramble, a crowd applauding an injured opposition player off the pitch, an opponent helping a player with cramp, a goalkeeper throwing his towel/bag combo INTO the net, watching an August game in a foreign boozer without a care in the world, walking in the pub before the first home game of the season. Seeing people who you only see in that scenario and are only on nodding/”alright mate” terms to but you expect to see there. All that, previously unfounded/now founded, optimism, when someone over hits a cross there is a teammate on the other side of the pitch there to retrieve and swing another cross in, other players celebrating a goal we score like they scored it themselves, impromptu hilarious chants, shots that go for throw ins, and replays where there’s no rotation on the ball so it’s just like a still photo moving through the air, United losing (United being 6th), players on posts for corners, when the ball hits the corner flag and stays in, watching the match with my dad………. 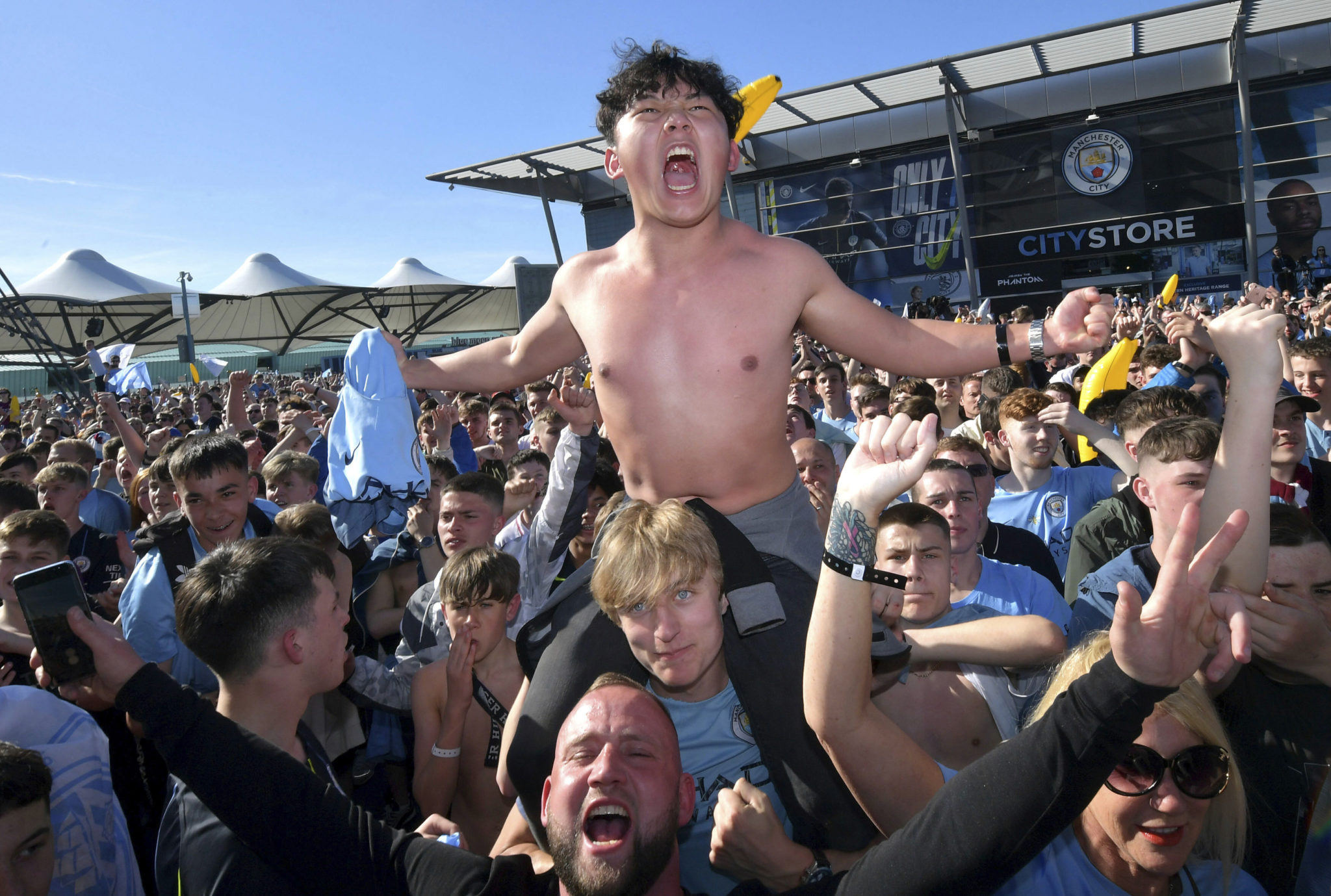