Agnelli's Closed Shop Reminds Us Of Italian Football's Murky Past

By Simon Curtis | 13 March 2020
Simon examines Europe’s closed shop and the Italian corruption that shines a light on Agnelli’s hypocrisy.

“God looks out for drunks, small children and Juventus,” wrote the doyen of football writers Brian Glanville in World Soccer in 1981 and little appears to have changed in the near-40-year period since his utterance.

Last week Andrea Agnelli (if his surname seems familiar, you’d be right to be thinking it’s been a long lucrative family affair in Turin) offered an insight to the mentality of the Big Shapes sitting firmly on the lid of European football, so that nobody escapes from inside the box.

“Atalanta should not be in the Champions League as they are without any European history and it is on the back of a single good season,” he chuntered to a frowning local press pack. This, in a nutshell, is what we are all up against.

It doesn’t matter whether you support City, Everton, Villa or Port Vale: Frankfurt, Feyenoord or Fenerbahce. If you go to bed with hope in your heart, this is the thing of evil nightmares. Agnelli is of the Silvio Berlusconi school of thought, inhabiting a kind of light tunnel that smells of noteworthy cologne and discarded bikini bottoms. Indeed, modern day Milan, a carved-out shell of their former multi-trophy winning selves, are still what we might say “at it” too, pushing from their winner-and-influencer position of mid-table in Serie A for a permanent place in the Champions League alongside other History Giants. For Bunga Bunga aficionados, it seems, no party is out of bounds.

You get the feeling Agnelli would like a fragrant slice of this too. No pesky Atalantas in sight and guaranteed big bucks as the lemmings file in to watch Manchester United and Real Madrid every season. It is the kind of closed shop that keeps Karl Heinz Rummenigge awake under his silk sheets each night. It is what keeps UEFA’s big brains churning. What is being mooted without the need for subtlety these days is a Europe-based version of the International Champions Cup, which so holds our attention in the warmer months. Liverpool v United in Washington DC, Juventus v Bayern in Ho Chi Minh City, that sort of thing. Only this will be the cool new look of the Champions League, which many will say is already practically a closed shop anyway.

Let us face the facts for a second. How many teams can realistically state they have a chance of winning it? From how many countries? Your answers should realistically be “approximately eight” and “approximately four” or, as of this week, “maybe nobody at all”. 53 years since Celtic last won the big pot for Scotland. 34 years since Steaua pulled one in for Romania. 29 years since Red Star landed the trophy for Serbia/Yugoslavia and 27 since a French team won it (Olympique Marseille in 1993). It is 25 years since Holland’s rich history in this tournament last bore fruit and 17 since Jose Mourinho’s Porto landed it for Portugal. This is the closed shop that Agnelli wants to close off even more. David Gill has done the UEFA maths and it all adds up to eight and to four.

It will not be, of course, the first time that Juventus and Milan have thought outside the box to get themselves a winning advantage. Both clubs featured prominently in the Calciopoli scandal in Serie A in 2006, where a network of bribe pushers and fixers had made themselves busy tipping the level playing field in certain directions. Juventus were sent down to the black depths of Serie B. The 30-point deduction was thought to have sunk their chances of a swift return too, but, by the time the new season opened, the deduction had itself miraculously been reduced to nine. Heartened by this sudden goodwill, Juventus strolled to the Serie B title and were back in Serie A after 12 slightly uncomfortable months mixing with the unwashed rabble of Spezia, Rimini and Treviso.

Milan got away with a points deduction and a game behind closed doors in 2006, but had been up to their old naughty tricks to greater effect back in 1980 in the affair named Totonero by the press (why do Italian football scandals all sound like characters from the Wizard of Oz?). No wizards were available this time and Milan were forcibly relegated. This was the infamous match-fixing episode that saw future 1982 World Cup winner and scorer of the infamous hat-trick that knocked Brazil out in Barcelona, Paolo Rossi banned for two years for taking a modest bribe despite being one of the top earners in Serie A (nobody had insisted that all of this had to make sense). Rossi’s ban had originally been three years, but the Italian FA reduced it by one so that he would make it back in time for the ’82 World Cup. In the Land of Fixing, what’s another quick fix between mates, after all?

Somewhat laughably, the whole Totonero snake shoot had been brought into the open by a pair of Rome shopkeepers, who had thought up the scam in the first place. Annoyed that the matches they had attempted to fix and the players they had bought were not all delivering the results they had ordered (let’s just say it’s an imprecise science), they first tried blackmailing those same players then, when that didn’t produce the cash they craved, by going public with their little scheme.

Milan president Felice Columbo was the biggest name on the Carabinieri’s arrest warrant. Milan the biggest club involved. Additionally, and in a moment of high farce that Roberto Benigni would have been proud of, all those initially indicted were subsequently acquitted of all and any charges on the excellent grounds that – at that time – “sport fraud” did not exist in Italian legal lexicography and, therefore, could not carry a penalty. It may have been round about this time that Berlusconi invented bunga bunga, which again, as the terminology was new to the Italian Bar Association, could well have excused some of our Silvio’s more outrageous night-time moves.

Milan, then, one of UEFA’s would be shoe-ins if they can persuade the football turkeys to vote for Christmas, have been at it for decades. Like Juventus, they find it hard to accept a meritocracy and its debilitating effects in any other eras than the ones they are busy dominating. In their present threadbare clothes, any old foothold will do. Other UEFA mainstays like Manchester United, Bayern Munich and Real Madrid may well like the cut of Aleksander Ceferin’s jib too.

Paris St Germain, like City troublesome monied upstarts threatening to overturn the applecart, seem, by adopting a different strategy to City, if not to have ingratiated themselves with the elites, then certainly to have been allowed to slip through the tightening net. By paying what amounts to a bribe to stop legislation against a bribe, they too have disappeared up their own financial tunnels, but without the abrasive fighting talk coming out of East Manchester. On first reading, their numbers fail to add up too, but maybe David Gill doesn’t speak French.

It is highly ironic that, at this time of high-profile trouble, the reprobates have been pitched against the royal family. Old money against new. Old ideas against tiresome modern arrivistes. Besmirched sky-blue shirts taking on the regal white robes of Tebas, Franco, Bernabeu, Castillana, Butragueno and Florentino Perez.

Who can forget the indelible images of the Brazilian superstar dangling his Milan shirt from a baroque city centre balcony, after being saved from the clutches of dirty, salivating City in 2008? The boy who was born to play for God almost fell into the clutches of Garry Cook, but instead made the safe and glorious passage from Milan to Madrid, from one rock solid giant to another, from one sporting bulwark to another of the game’s central pillars.

It should have been a lesson for City then and there not to meddle with the big boys’ business, but lessons are not always learned the first time, especially when the Gods have forsaken you for another. 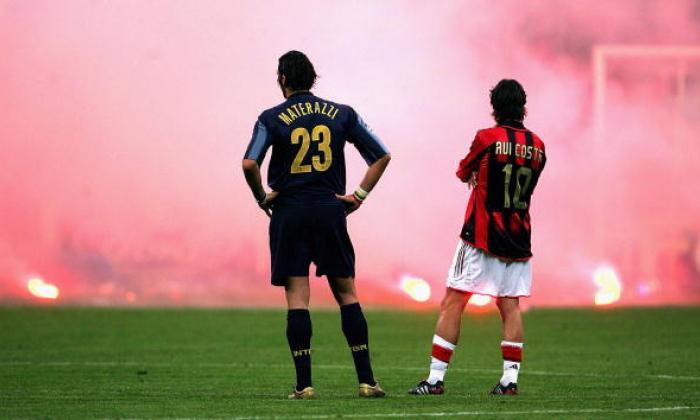