By Howard Hockin | 30 September 2021
Howard goes to Old Trafford to watch Manchester United. And of course explains why he would do such a thing.

As Cristiano Ronaldo slotted the ball into the bottom corner of the net via the keeper’s papier-mâché hands, the unbridled joy apparent as the realisation dawned on the face of the preening peacock that he had a perfect excuse to take his shirt off, the crowd rose as one to celebrate another unlikely comeback and a late, late winning goal. As the cameras panned round the crowd, it will have picked out my dad, a lifelong United supporter, celebrate what was turning into an important win in the Champions League, after a difficult couple of weeks. But the cameras will also have picked out his son, stood next to him.

My dad only has one son.

Last night, I, a Manchester City fan of 40 years, chose to go to watch Manchester United at Old Trafford. I guess I had better explain why.

I’m not sure if this is a common occurrence or I am one of the few to do this, but occasionally I have this morbid thought about going to a football match for the final time. After all, one day, we will all go for the final time. Step into a stadium, walk through the buzz of a concourse, up the steps, greet my friends, hopefully celebrate some goals, and stream out with the masses, out into the city streets, be it happy, sad, or simply OK. Would you want to know you were watching a game live for the last time? I certainly would not, as it would be unbearable. And most of us will thankfully not know when that day arrives. It’s best not to know, unless you’re happy never to go again. Because the thrill of live sport is something to be cherished for as long as possible, like a full English breakfast, Bob Mortimer or Evanescence’s “My Immortal”.

You shouldn’t have that feeling of thinking you will never go to a match again. And so, to the past. It was the last normal Christmas before the world fell apart, which must mean December 25th, 2019. I was participating in the annual spectacle of pretending to enjoy Doctor Who, or perhaps reading a book I had received as a present. Across the room, I caught the edges of a conversation between my dad and my sister. He commented how that since his sister had died, who he would occasionally go to a match with, he didn’t think he would get to go again. It was quite sobering to hear, and so a plan was hatched, and then no one got to go to football grounds for the foreseeable future. But hey, the best plans take time, and may involve waiting out a global pandemic.

And so when my friend Steve offered two tickets to the Villareal match as he was away, I decided to take the plunge. Checks were made – that my dad did actually want to go to a football match, and that he felt safe doing so. My mum won’t let him go into a cinema yet, so it was quite the coup to get the thumbs up. As my dad is a United fan, I have never had that match-going experience with him as an adult, only as a child. In fact, it may be almost 30 years since we had been to a game together, until Wednesday night. This has never bothered me, as it may others, and my dad has never seemed overly-keen on going every week anyway. You don’t have to be a season-ticket holder to prove your worth as a fan, and I have never seen going to a match as a family affair. Just a chance to watch the sport and team I love more than any other.

Sat in traffic on Chester Road for a good hour, wondering if we would see any football, I began to question the masterplan. I finally asked my dad what my first ever match was, but he could only think of City’s 10-1 defeat of Huddersfield, when I was 13. So it won’t be that. I will never know, not that it matters. I will never know why I decided to become a City fan, but I guess when it is not decided for you, it must just be the feeling that one club gives you. Or perhaps a love of the colour blue. Dad never pushed United my way. He was not a fanatical supporter, and one of the old school variety who sometimes watched whichever Manchester team was at home that weekend. And so here we were, 40 years later, getting the gang back together. If we could beat the traffic. But despite the recommended car park being full, and the next one too, we found a quiet cul-de-sac, and got to the ground in time. No queues at the turnstile, and a mobile ticketing system that worked seamlessly. Take note City.

It had been a while. I haven’t been in Old Trafford in decades, perhaps since Denis Irwin’s testimonial, a feisty affair. It is indeed showing its age, a relic of past success now that Ole is at the wheel. I am 6ft tall, as is my dad, and the room is not there to sit down comfortably. There is a reason this ground has the highest capacity of any club in England, and it is because they pack everyone in like sardines. I was almost glad that everyone stood for the match, my dad probably less so. No proper scoreboard, and they count down the time during a half, which is scandalous. You’d never know if a VAR check was in progress apart from a delay in kick-off, and it’s all rather amateurish. I even saw a few empty seats. It is rather misshaped, and is rusting away, but a big stadium during a match is still something to be savoured, even across enemy lines. And those around me seemed decent folk.

I booed the Champions League anthem in my mind, and confidently told my dad that United would win this game comfortably. 3-0 was the prediction, though he didn’t seem quite so sure. At the opposite end to the Stretford End, there was early noise, that soon drifted away in the evening breeze, though you can blame Solskjaer and the players for that, because it soon became clear that United were not going to win the game comfortably. There seemed little anger around me at what transpired, just a quiet resignation. There wasn’t even the energy to sing anti-City songs, no the whole.

I got a running commentary on the state of United from the man sat behind me. He talked a lot of sense, if I’m honest, but still….he periodically insisted in bantering with a man called Les sat 4 rows away, which on a weekly basis would soon see me on an assault charge. The elderly gentleman in front kept me fully up to date on Villareal’s shot-count, and did a little jig when eventually United had their first shot. He spent the match shaking his head in disgust, and fittingly left before the winning goal. Beat the traffic, though.

United were bad. Really, really bad, which made the time go quicker. Villareal found it easy to beat United’s press, as there wasn’t one. They were well organised and found space down the flanks with ease. If they had not leaned back every time they shot, the game could have been put to bed by half-time. They were City v PSG. The better team, wasted chances, then lost. Having taken the lead, they did not trust in their own ability to continue to dominate, but instead became more negative and late on gave away the ball frequently for the first time, and paid the price.

And it was refreshing to know that all football fans like a moan. I had a little chuckle at those around me bemoaning that Solskjaer never makes a substitution before the 75th minute. He’s not the only one. Pogba got plenty of the stick, Telles too, though he made up for that. Sancho was largely anonymous, and there seemed no particular system being employed by United.

And yet once more, the spawniest team in the country won again. Surely, considering that I was not at the ground for my own gratification, I should seek some solace in United winning in such dramatic fashion? Hmm, maybe I thought, as I stared vacantly into the middle distance, fake clapping as all around me celebrated. In a way I got the best of all worlds. My dad was happy, the game was not a vital one, and I could take away the satisfaction of just how average this team is under a manager that most Championship sides would not consider hiring. My dad thinks he is doing a good job, and that is something we can both agree on. He is doing a quite magnificent job as far as I’m concerned. But one goal can make so much difference to the mood of a crowd, and we shuffled out together with Ronaldo chants ringing in our ears. I asked my dad if he had enjoyed the match, and he said he had.

But whatever the score, it was nice to be at a game with my dad. It is unlikely to happen again, as I went my separate way at an early age. Was it worth sitting in traffic for over two hours, and in a cramped seat, to watch a team I despise score a last-minute winning goal, surrounded by people I have no football affiliation with, in an ageing stadium, sober, out of pocket and without even a good enough reception to check the other scores?

Well I guess that is a question only my dad can answer. Hopefully the answer is yes. Hopefully, it was worth every minute. Maybe that was his last time in a football stadium, maybe it was not. Maybe he’s not that bothered in the same way I would be. Either way, last night had to count for something, and count for far more than the result. It’s what going to football is all about. Something special, to cherish while you can. 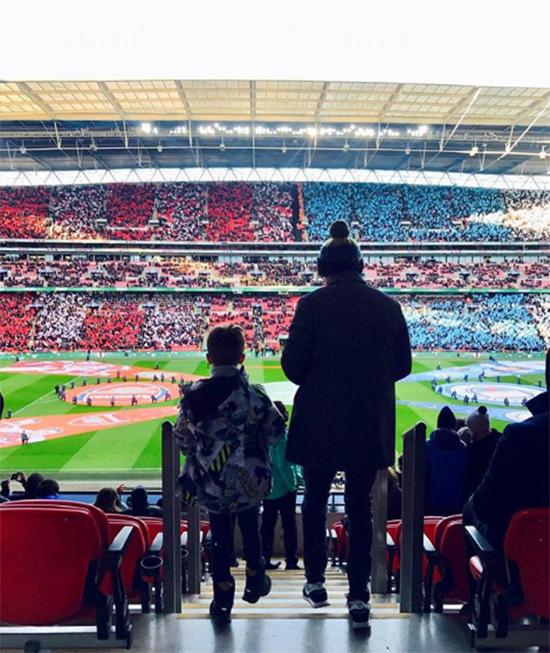