Whilst many of us who write and talk about football desperately scrabble around for things to talk about, expressing shock and horror at Premier League plans or pretending to care about Harry Kane being linked to Manchester United, here at the podcast we have produced plenty of shows that do not mention football at all. So I thought it was perhaps time I wrote something that has nothing to do with it as well.

Like all of us, I have new habits. Some of them are good, some not so good. I’m getting quite a lot done, but slowly. I cannot concentrate for any period of time. I have a book I want to write, but my creativity levels remain at zero. Its deadline was always supposed to be the end of the current season, so I’ve probably got a year or so to complete it.

Alcohol consumption is considerably down. Food bills are considerably up. I am spending more money on local produce, which is great. I have 30 eggs from a farm in Knutsford, and a £20 random fruit & veg box, all delivered to my door. A convenience store in Urmston has delivered £25 of goods too, the snacks demolished by day-end. Any delivery excites me. I wasn’t sure whether to order online at first for non-essential items, as it is providing work for those that probably should be at home. So I limit myself to stuff I think I need. And a new duvet cover. The buzz of getting the random £20 fruit and veg box was illogical considering all items have always been readily available at every supermarket within a 50 mile radius and more. I did not think it would take a pandemic for me to fall back in love with cauliflower.

Nothing is normal anymore. Last week I retweeted Piers Morgan. I don’t think much about football, and I can’t begin to consider what the future holds for the sport and our football team. And for now, I don’t really care. It’s just not important, but eventually it will be again, that much is sure. Anxiety arrives in patches, as you probably all know. There is a randomness to it that is not controlled by actual events or news. Like a chameleon, it comes and goes.

The afternoon lull is the worst part of the day, as it has been since I left office life almost four years ago. It is natural for the human body to have this lull – there is a reason apart from the temperature that many Mediterranean countries enjoy an afternoon nap. But the lock down has brought with it a new phenomenon, namely the existential angst I feel about 3pm each day. That is generally when my work is done. It is at this point that I have my daily internal debate about what to do next. The angst about how best to use my time during this unique and thus unprecedented period. Should I really be doing more work? Is it too early to watch TV? Why does it matter what time it is?! Why am I not reading more? Why is the flat still a tip?
What day is it?

Each day, an elderly gentleman wanders out of the flats next to me and takes a pew on the low wall by the main road, catching some fresh air, and watching the world go by for 20 minutes or so. There is a little caveat to this routine, a stark reminder of the times we live in. If he sees someone approaching along the pavement, he will gently rise and wanders back up his path until they have walked past, ensuring social distancing. Then with the coast clear, he returns to the wall, and to his routine.

I’ve always cooked, but I seem to spend an inordinate amount of time washing pots. I hate doing them at the best of times. I can’t stop eating either, which makes little sense as I am used to being at home. The fact that a summer holiday has gone, plus all my social life and a lot of football too, means that I convince myself that I am thus entitled to spend a few quid here and there on treats, in food-form. So it’s only the best mince for me, there’s some nice roasted peppers in a jar in the larder and I have discovered the joys of chocolate 40 years later than most people. I mean, I know it’s nice, but I’ve never really craved it before. I do now. I would kill, and repeatedly, for a salted caramel flap jack right now.

I am isolating alone, which is not ideal. I worked from home before all this, and have at least 5 hours of work to do each day, so the old routine is largely intact. But like many of us, I crave more, I need it. To speak face to face, buffer-free, to laugh at someone’s joke who is sat opposite or next to me, to get a round in, jump in that taxi to the ground with friends, hug a friend after a goal, to stream down the stairs post-match, jostling for position. To look into someone’s eyes. When will I not fear walking past another human being again? Sadly, it may be some time. It won’t be this year. At least sleep is normal, and slowly I am getting round to that big spring clean I’ve been planning for 12 years. But essentially, what many of us have learnt above all else is that we’re shit people to live with.

When I do go out, I get frustrated pretty quickly. A small minority simply aren’t that bothered about social distancing. Maybe they think it’s a government conspiracy or something. Joggers are the worse, many seemingly thinking it is not their obligation to move out the way, much like many a cyclist on the canal. Many of them have given me a nice ring of their bell when approaching from behind in the past. I’m not sure why, as I’m walking in a straight line, so it’s on them not to crash into me – I’m not suddenly going to take a random jump to the right. But on my current walks, my inner dialogue is out of control. The dialogue centres around my frustration at so many other people being out doing exactly what I am doing. I am here of necessity – they are selfish, and are probably causing more people to die. And so in my head, it’s the same insults on a near-constant loop.

“Fuck off. Get out the way. Why is HE out? She doesn’t look like she’s exercising. Look at them just wandering along without a care in the world. Those two don’t look like they live together. Oh for fuck’s sake, another person approaching. Fuck off. Oh right, I’LL walk into the road I guess! Selfish arse. Get out of  my way…”

Back at home, I have this occasional routine, of taking some rubbish out after it has got dark. I dispose of it, then walk round my block of flats twice. To escape, to stretch my legs, to feel at peace. It is quiet, eerie, and I like how it feels. I’ve spotted a hedgehog sniffing near the bins, and chased a cat who was teasing a dormouse. Never has air felt so fresh, so comforting. Never have the stars shone so bright in a city, though Elon Musk’s satellites are still not visible to me amongst the trees and artificial lighting of a city-scape. I’ve suddenly become more social. Video calls, something I would have previously run a million miles from, are now the norm. I have done 2 quizzes, and won 1 of them. This Friday, I shall be the quiz-master. Last Saturday, I woke up with my first lock down hangover, and it was brutal. A mix of red wine, pale ale and stout is not one to be recommended. Next up is to sort a poker night. And a few more podcasts of course, mostly involving looking back, as there is very little looking forward to do.

In this brave new world, friends check in to see how I am, and I do likewise. Men who have previously only talked about football and beer now talk about feelings. This pandemic has been terrible, but not 100% terrible.

And on the horizon my birthday is honing into view. Historically it has coincided with relegation and more recently tense, nerve-wracking title races.  Now it will be greeted with a distant wave, a day online, and an app order from the local ice cream van. That’s living alright. A week on Monday will be 365 days since I climbed Catbells in the Lake District at dusk, just as Liverpool cheated their way to a late winner at Newcastle. Step forward Vinny. I’ve never needed to celebrate birthdays, but this one will be tough. After that, each week, cancelled events will be ticked off the calendar. A friend’s wedding in Spain, a week in Turkey, the Euros, two more possible Wembley visits, and a lot more besides. The burning desire grows each week to make up for lost time, at some point – but who knows when? There will be many more casualties once we are all eventually set free.

The elderly gentleman is outside again, and today he has brought with him a cushion. It’s a really nice day out. The breeze is down. Two months ago, the thought of me doing something like this would have had me scratching my head. But it’s not two months ago. Things have changed.

I’m going to go outside and say hello. 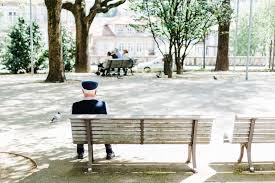